Mega Man is a series many love and enjoy. Starting on the NES in the late 1980’s, it was Capcom’s early effort to produce an original game for consoles after having much success making arcade games. While the series continued for many years and had many releases, it’s important to remember the origins of the series.

Through a blending of concepts from arcade titles and the traditional 2D platformer, Mega Man did a lot to feel unique in the genre. But does the original classic hold up today, more so in comparison of the other games in the series?

The story behind the game is that kind scientist Dr. Light and his two creations Rock & Roll are living in peace, with Dr. Light going to show the world his six robotic creations. They would help with important jobs such as construction, powering cities and other such jobs; they would better mankind as a whole. 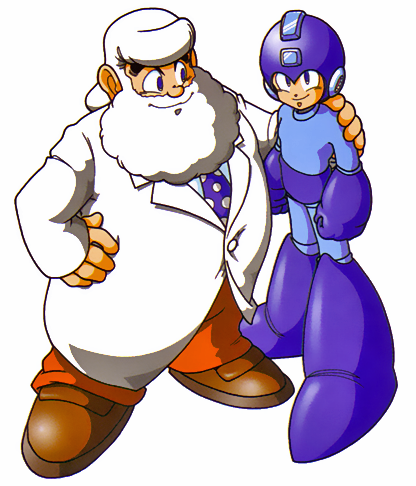 However scientist Dr. Wily worked with Light during their college years and got jealous of his success. So, he ended up high-jacking his robot masters, having them unleash havoc across the land. Rock sees this and requests being turned into a combat robot. So after much consideration, Light modifies the cleaning robot into Mega Man, a super fighting robot.

While other versions of the origin story get more fleshing out (with Powered Up having a more personal story for Rock and crew), the original Mega Man works well through a simple premise that pushes you to save the world.

The core gameplay of Mega Man is very simple; you can jump, shoot and use robot powers you gain from defeating the six robot masters. However the game does a lot of interesting things to stand out from other platformers.

Instead of having a linear level progression, you can select which level you want to go to first. What does this mean? You can tackle any level in whatever order you see fit. This was huge during the late 80’s, as very few games even attempted to do this. That design choice carried over to many other platformers post Mega Man, even other Capcom games like Ducktails.

The other interesting element is how the robot masters work, as instead of just being bosses that you can only take out with your basic shooting, you can use other robot master powers that they are weak against to make the fight easier. This results in a rock-paper-scissors system being in place and this carries across through the entire Mega Man franchise.

(Time Man and Oil Man were in the MM1 PSP remake, Powered Up)

With all of this in place, how does the core gameplay work? Like I said, you can jump, and shoot. But what makes this so special, is that the game is hard for all the right reasons.

Every situation you face is something you learn naturally as you play. One example includes Gutsman’s stage. His level opens up with platforms that go in-and-out on a track. So you hop on the first one and you see a little gap, so you jump over it.

This happens with the other platforms under you and learn this, avoiding the issue. This type of level design echos across the entire game, making a very hard game that doesn’t feel cheap; every death you get is your fault, not the games. Platforming that can be too challenging can be dealt with through finding the Magnet Beam (which is in Elecman’s stage once you get the Gutsman’s ability) as well; exploration makes harder platforming sections less of a challenge if you get too frustrated.

Boss fights in the game are also very enjoyable too, as every one can be taken out with just your Mega Buster (basic attack) but like I mentioned before, you an use the bosses weakness to make the fight easier. Mega Man is also infamous for introducing the Wily Tower for the series; a place where you fight across challenge levels and face difficult bosses (and re-fight the robot masters) before facing the evil doctor himself. It works really well and feels like one final challenge before you can put down the controller. You tell yourself ‘I can do this, I will overcome this game’ and beating the tower accomplishes that feeling so effectively.

Sadly there are a few issues with gameplay and design that hold things back a bit. Mega Man’s control is good but could be tighter, as you can slip off platforms you hold down left or right for too long. This is annoying when dealing with smaller platforms but you adjust to it the more you play the game.

Boss fights aren’t a major issue, as they feel rewarding to take down and never feel unfair. But sometimes you can be blindsided and even though the challenge is fair, you might get frustrated with the high difficulty some of the games fights provide.

Mega Man feels like a carefully crafted production that had a lot of thought and care put into it’s gameplay systems. Nothing feels cheap even if the challenge levels are a bit high at points and over coming anything you face is so rewarding. You also have a lot of replay value through the level select feature, as it’s your choice how you tackle playthroughs.

Presentation is strong, as the sprite work is very nice and detailed, with everything looking expressive. The levels can look a bit space, but overall, its a nice looking game. Considering the games origins on the NES and being one of the Capcom’s first major platformers for the console, it is an impressive game visual during it’s time period.

Mega Man is called ROCK for a reason; it’s entire score is catchy and iconic for all the right reasons. Manami Matsumae is the composer for the game and she makes many more tracks for the series as time went on. Each music track matches the stage themes quite well and you will be humming a number of the tracks once you put your controller down.

Mega Man is one of those games you look back on fondly and say ‘That was difficult but it felt so rewarding to play’. Through tight level design that teaches you how to play the game through it’s literal gameplay, you are never feel your hand is being pulled through the challenge. You take on the challenge yourself and over come it through hard work. While some levels and bosses can be a bit unfair at times, Mega Man 1 is overall a very strong action platformer that still holds up really well even decades later.