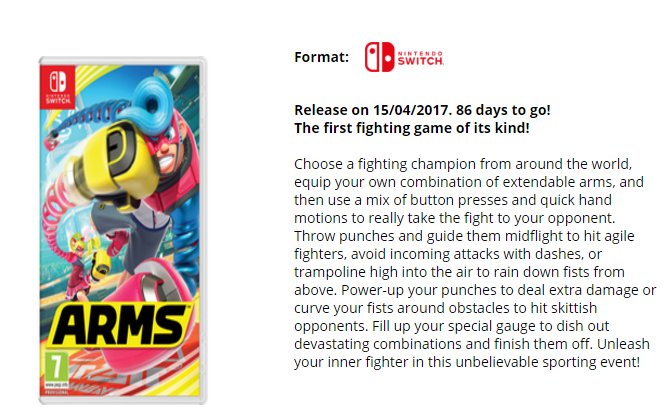 Arms is a major first party title blending a lot of elements from fighting games, Wii Sports Boxing and even some art style elements from titles like Splatoon in creating a fun early title for the Switch’s life cycle. Nintendo gave it a spring release date but many are wondering ‘what specific date will it come out?’

Retailer GAME might have given the news a bit early, with it releasing in April 15th according to the site’s listing. Things like release dates from retailers can change at any point and it could be place holder, but considering how small the Switch launch line up is and the fact Nintendo gave it a blank ‘Spring 2017’ release, this date has some logic behind it.

Please wait for an official statement or comment from Nintendo regarding it’s release date though, as like I mentioned before, dates could change and this could be place holder.