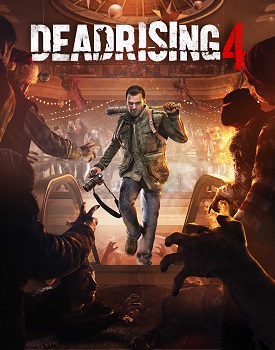 Capcom might have a horror title out on the PS4, Xbox One and PC but for zombie killing action, you can take a visit to the Xbox One & PC for some Dead Rising action! Dead Rising 4 is getting a big update which features a lot of new elements.

Since Dead Rising 4 released on Dec. 6, players have killed over seven billion zombies, eclipsing the population of planet Earth. You’ve also taken over three million photos and selfies, eclipsing most of the Kardashian family on any given weekend. To offer current players further engagement with Frank’s world, I’m excited today to announce that we’re introducing two new game difficulty modes and releasing a Street Fighter outfit pack, both free to all players. This is accompanied by a patch fixing several bugs we’ve been tracking since launch.

Microsoft and Capcom are working on fixing issues people had with the base game and one element is the difficulty. A new one will be added to the game and they explained what it will offer.

Frank will need to be a lot more careful and aware of his surroundings when trying to survive on a higher difficulty. Enemies do more damage; Frank’s weapons break faster and food restores less health than before. Keep your eyes peeled, watch your back, and don’t forget to scrounge for every weapon – you are going to need them. The new difficulty modes will be available to players on Jan 30

You will be able to play the game with two new difficulty modes and they restore elements from the original Dead Rising games. Weapons that break, hunting for food to restore health and survival elements are present in these two new difficulties. While it doesn’t solve issues people have with the game completely (it feels very different from past Dead Rising titles), I feel it’s nice they are taking feedback and making needed changes.

The game also has special extras for this update, including some street fighting costumes for Frank!

While in game, just visit your wardrobe and you will find these five outfits for your ultimate zombie fighting experience. The outfits will be available in game on Jan 30. Handsome fighters never lose battles!

Based on the Capcom Street Fighter series, Frank will be able to don costumes from iconic characters in that series in the update. A nice extra for fans of the series I think. Other noteworthy information from this update includes a Germany release and a free trail that people can give a shot.

For those that have yet to face the horde in Dead Rising 4, we’re excited to announce the availability of a 60-minute timed trial experience for Xbox One. The trial will allow new players to earn achievements and carry saved game progress into the full game should they decide to purchase at the end of the trial period. Players can experience both single player Story Mode as well as Multiplayer during the trial period.

The timed trial experience will be available beginning Jan 31.

Xbox One and Windows 10 PC players in Germany will be able to purchase and play Dead Rising 4 from the Microsoft Store on Jan. 31, marking the first time a Dead Rising title has been available in the market. We can’t wait for new players to get their hands on the game. For players wishing to purchase the full packaged product of the Xbox One game, look for retailers to begin offering it in late February.

To all our dedicated Dead Rising fans and players, we thank you for your feedback. We listened to what you have asked for and added the new difficulty modes and achievements to go with them. And to those that have not jumped into Dead Rising 4, go ahead jump into the Xbox One timed trial and Let the Slay Ride Begin. And to those new players in Germany, “Wilkommen in der Welt von Dead Rising!”