Kingdom Hearts is a series that was huge when it originally released on the PS2 back in 2002. Blending Square Enix and Disney franchises together was such a strange move, that it worked wonderfully. Seeing success, Disney & Square Enix decided to make a huge sequel on the PS2 in the form of ‘Kingdom Hearts 2’. Focusing more on action instead of exploration/platforming, Kingdom Hearts 2 pushes the series further into being an action game then ever before.

Exploring new Disney worlds and fighting heartless again, does Sora’s second adventure unlock gamers hearts? Or does it sink into the darkness? Get your Keyblade ready and go on Disney-themed adventure to find out!

Taking place after the events of the original Kingdom Hearts and Chain of Memories, Sora is taking a deep slumber to recover something lost. So while this is taking place, we take control of a young boy named Roxas. He just wants to have a nice summer vacation with his buddies and only having seven or so days left, he makes the most of it. Planing to visit the beach, visiting areas of the Twilight Town and eating sea salt ice cream. But strange things happen that lead Roxas getting involved in Sora’s adventures and he even can use the Keyblade! After understanding why odd things are happening, he ends his summer vacation on a bitter note. 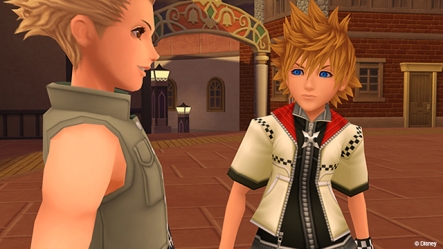 We then take control over Sora three hours (of gameplay time) later and set out on an adventure across various worlds to not only find King Mickey but also reunite with close friends. Kingdom Hearts 2 has a story that isn’t really strong when fully connected but parts of it have a lot of impact. The entire story surrounding Roxas is tragic and I felt for him during my time controlling the character for example. But when you look at the bigger picture, it is needlessly complex when it could be simple.

Kingdom Hearts 1 had a story with simple terms; Light is good and Darkness is evil, Young Heroes save the world from major threat, Disney villains working to together, main bad guy ‘super’ darkness. In KH2, it just adds extra layers to this and it is just not needed. Granted it has impact later in the game when facing the main Nobody of Organization XIII and Sora understanding something very important about himself is powerful. But I just would have liked it to be a bit more simplified.

A great case for this is the entire opening three hours. I loved it due to understanding why all of it was going on…..but that was after playing other games in the series. If you just jumped into the game without playing past titles, it would be easy to get lost or not fully understand what is going on.

Characters help with this and I greatly enjoyed Sora in this title. His goofy personality bounces off very well with Disney and Square Enix characters alike similar to the original Kingdom Hearts. Icons from past Disney/Square Enix releases are also present with much of the voice cast from Disney films (James Woods as Hades for example) returning to reprise past roles.

Another issue I have with the story is that the Disney worlds feel less important. You experience a summarized version of the films and small changes for returning worlds are nice (Ex: Aladdin re-tells the story of ‘Return of Jafar’, Nightmare Before Christmas has you explore Christmas Town, Hollow Bastion has new locations to explore, Hercules had the entire Underworld to explore). However they don’t connect well within the overarching story; you have flimsy excuses for visiting the worlds this time out.

The overall story of Kingdom Hearts 2 is honestly mixed. On one hand, you have strong characters that really connect with you through powerful moments that happen within the story and exploring Disney worlds feel ripped right out of the iconic films they come from. But you also have the issue of the story being confusing if you never played past titles and a few things being needlessly complex. It’s a flawed story but one that is very enjoyable.

Sora and friends explore space when traveling to different worlds and in order to ‘unlock’ them, they must navigate through special doorways. You need the Gummi Ship to accomplish this and while many had issues with this in KH1, it’s far more improved here. Sora can customize the ship with various blocks you earn from the Ship levels but you also get access to blueprints as you play through stages; you aren’t forced into building ships if you don’t want to.

Ship levels are very enjoyable as they mirror arcade shooter classics, with fun enemy patterns and bosses to fight. Even better is hearing Sora, Donald and Goofy offering banter sometimes when playing through the levels. You can revisit completed levels for more parts and to get better rankings.

When you get access to the worlds, you normally have the option to visit a few at once (two or three at a time). Visiting a world offers you an large area to explore based on a Disney IP. So you can explore Beast Castle or Simba’s Pride Lands for example. These sometimes offer radical shifts in gameplay; during your first visit to Olympus Coliseum you lose access to use the ‘Drive Form’ ability outright until a specific narrative point in the world takes place. Another example is visiting the Pride Lands, where Sora turns into a Lion. This completely changes how he uses melee attacks and grants you high mobility.

Examples likes change up how you play the game and makes looking forward toward each world exciting. Overall the basic design frame-work for KH2 is simple but effective, making game flow feel quite strong.

KH2 offers similar controls to the original game, with you having a command menu (that you can control either with the D-Pad or the Right Stick when holding down L2) but unlike KH1 there is a second menu that you access by pressing left. This gives you access to Summons and the ability to swap out party members on the fly. This simple change is great as it exposes a new element to the combat system; the Drive Forms. Sora gains access to this ability early in the game by allowing him to fuse with his party members to gain new combat abilities.

For example, you can enable the Valor Form which trades in Goofy as a party member in exchange for a limied time where Sora can unleash powerful melee attacks. A magic variant of this form is also available, as four other forms that you unlock across the game. This system adds an extra wrinkle into the combat system as by using the Forms, you can level them up. Each form has a traversal ability that Sora can use when the form is active, but cannot when the form is disabled. However if you level the forms enough, you can unlock moves like an air-dash, double jump and gliding through leveling the forms up.

It pushes you to use them frequently and with levels being larger in scale, these abilities are very useful to unlock. Basic melee attacks, magic and summons return as well, giving Sora one of his largest move-pools in the entire series. Level up isn’t difficult and the game is honestly not that hard….unless you enable ‘Critical’ Difficulty. That is when the Combat sings, with you being forced to master the combat system. However it makes the lower difficulties a cakewalk. Later worlds offer more challenge but the difficulty curve could have been a bit more polished.

Boss fights in the game are large in scale and offer a nice change of pace for combat. You could be fighting a giant Lion-style Heartless in Pride Lands one moment and the next face Oogie Boogie on three moving conveyor belts. They aren’t very hard but they mix things up enough to feel fresh and engaging. Late game boss fights really stick out and I greatly enjoyed them. The final boss fight is a great example of epic bosses done well in KH2.

Additional boss fights can be discovered and that is where major challenge is present. They test every skill you have available and even on lower difficulties they are a great challenge to overcome. With combat being so strong in KH2, the platforming present in KH1 sadly suffers; it is largely gone outright. This is mainly due to level design focusing on tunneling you toward goals, rather then having more open levels like the original KH. I feel this was a strange design choice, considering the greatly improved camera controls but due to the large focus on combat, it is understandable to focus on that one strong aspect.

The overall gameplay of Kingdom Hearts 2 is strong and something I feel action game fans in particular can greatly enjoy. Sora feels wonderful to control and pulling off crazy attacks by chaining melee, magic and more together is fantastic. It is a bit simple and the low difficulty can be a problem early in the game but when it ramps up, the gameplay can feel very strong.

Kingdom Hearts 2 is a fantastic looking game even in 2017. It has a striking visual style that is colorful, has lots of detail and works well across the many worlds you visit throughout the game. Character animations and specifically facial expressions greatly improved over the original Kingdom Hearts, When a Sora or Donald is angry, you can feel the anger on the screen. Visual effects like bloom, sparks when hitting objects and general magic attacks look wonderful as well, ensuring KH2 looks great overall.

Sound is easily the best part about the game’s presentation though as sound effects are audibly strong. Every hit with the Keyblade or magic attack has impact making every action feel great just through sound. Music is fantastic work, as it sucks you into every part of the game. Hearing an iconic theme when battling undead pirates, lively retro-styled beats when combating cartoon cars, and hearing a tear-inducing theme when battling a specific character; music in KH2 is powerful.

Kingdom Hearts 2 is a polished action/adventure that uses RPG elements to create a magical experience. Gameplay feels fantastic when in combat, presentation is polished and story elements have elements you will really enjoy. However due to the somewhat muddled nature of the story and confusing elements that do not translate well for people new to Kingdom Hearts, the narrative isn’t the series best.

Don’t let that push you away from a quality action experience, more so if you love Disney’s wealth of iconic characters and franchises. As someone who played KH2 as his first Kingdom Hearts title years ago and played through it twice for this review on the PS3 release of KH II.5 HD, it’s a game I highly recommend. It has problems but they do not hold back what is a great looking and playing experience.