The Blue Blur was on a good run from 2010 through 2012 with games that were both commercially and critically successful, rebuilding the series brand. But SEGA wanted to try out a new formula, so they let Sonic Team experiment with the 3D formula they nailed down with Sonic Colors & Generations.

Say hello to Sonic Lost World, blending the series 3D platforming from the Adventure days with level designs/ideas that might be inspired by the red plumber’s tour through the galaxies. But we are talking about the 3DS version of Lost World, the first 3D platformer in the series to release on a handheld.

Does Sonic dash successful in 3D on the go? Lets find out!

Sonic and Tails are flying in the Tornado to chase down Dr. Eggman, who captured little animals in a capsule. Sonic tries to free them but Eggman drops it towards a place called ‘The Lost Hex’. Sonic & Tails chase after it, starting the adventure. The basic story here is well-told and tries to blend the serious moments from games like Sonic Adventure 2 but with the humor scene in Sonic Colors. The result? Well, it is a bit mixed. While some moments work out really well (one scene where Eggman gets angry really took me by surprise), it just feels to inconstant.

I do respect that a more darker story was trying to be told but it just doesn’t mix well with the Colors-esc humor. One part of the story I do enjoy is the character interactions, as they are done well. Sonic and Tails are great buddies like before but Eggman & the Zeti characters add some nice dialog to the mix. Each one is a generic ‘trope’ but they are done well enough to where you can laugh at them and enjoy how they taunt Sonic across the games many levels.

While the ending is somewhat abrupt and doesn’t feel rewarding, the story here could have been a lot worse.

Having a world map, Sonic can enter three acts per zone with each focusing on different things. The main type of stages are 3D platforming levels that blend careful movement with speed. Sonic has many of his abilities from past games, like the jump and bounce attack for example. But Sonic doesn’t run by moving the Circle Pad. So how do you go fast? You do so by holding down R, which enables running. Many find this odd but the reason for this design choice was to have careful movement when platforming.

Sonic is too fast I feel when in running mode, making it a bit hard to time careful jumps, so having the option to walk around was a nice design choice. But this running system works with parkor, Lost World’s main gimmick. Sonic can run alongside walls, up walls and jump from wall-to-wall. These are fun and feel quite responsive on the Nintendo 3DS. Sonic is locked in one direction when running on his side, and using the spin-dash to continue your wall-run feels solid.

Levels are built with these mechanics in mind, resulting in really fun levels at specific points in the game. Sonic also has various 2D-focused levels and they feel okay. Considering you are in 2D, you shouldn’t need the run button here but I felt the design for these levels were fine. I liked how they incorporate the parkor, as running up walls and using it effectively in 2D is quite rewarding.

Boss fights against the Deadly Six are fun, as each one has unique patterns to discover and once you do so, it feels great to defeat them. The final boss while easy, feels very close to the Wii U version of the fight and uses the Wisp powers you utilized across the entire game against you, making it stronger than it’s console version. 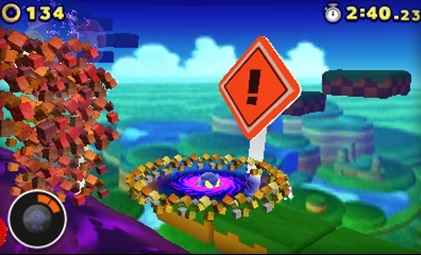 Sonic also has wisp powers returning from Colors and I’m very torn on their inclusion. Some levels work great with the wisp, as using ones like Laser (Sonic dashes in one direction), Drill (Sonic drills underground), and Lighting (lock on to objects) are a blast to use. But others like the Quake and Asteroid feel quite clunky. This results in levels that feel ‘off’ when they focus heavily on the Wisps, as some work well enough but others feel poorly designed.

Levels not designed around Wisps can suffer though, as one infamous level in Frozen Factory takes a very long time to complete and you will get annoyed as you play through it. One area of the gameplay that surprised me was the special stages, as Sonic is controlled here entirely through motion controls. You tilt the 3DS around to aim Sonic and he can dash forward by pressing R. By collecting colored orbs in specific orders, you will earn Chaos Emeralds. For the first time in ANY handheld Sonic, they unlock access to Super Sonic in-game. This is a wonderful reward, as it makes revisiting levels quite fun, more so when you are hunting down all the red rings.

Design issues and poor level designs at various points hold back the gameplay sadly but what’s done well really stands out, resulting in Lost World having fun but flawed gameplay.

Beating the main story of Lost World will take a good 3-5 hours but to collect all the red rings will take quite a while. But once you beat the game, you unlock a special hard mode, which changes parts of the levels in minor ways, so you have a reason to revisit past levels. Going back to the levels outside of hard mode is rewarded through unlocking new Wisp Powers; they unlock as you play through the story.

By the end of the game, you unlock all of them, so you can revisit parts of levels you couldn’t access before. This results in levels having more elements to them you might have missed originally.

This game looks quite nice on the 3DS, with levels having nice colorization and nicely textured character models. Animations are okay and sound effects sound good too. Cut-scenes suffer from major compression so they look all pixelated sadly. But other than that, the game is a nice looking game visually.

Music is one area Sonic always shines in, with this game being no exception. With themes that are very catchy and even tracks that have a lot of emotion to them, it results in a varied score that sounds strong when stacked up to other games in the series.

Sonic Lost World is a game that I wanted to really love, as it did quite a bit right. Controls are responsive despite being a bit slippery, the visuals are nice and the music is iconic Sonic jams. However, the game suffers from really strange level design that forces usage of unwieldy controlling Wisps and the story could be a bit stronger.  I can recommend this if you would like to see a full-on 3D Sonic platformer on the go but it’s far from the strongest game in the series.

This game was reviewed on a Nintendo 2D using a retail copy I purchased.