Hello everyone! The next part of this long series of post Celebrating the history of Sonic will be covering Sonic’s many portable adventures, with a large focus on the GBA games but also touching on the Game Gear adventures as well. 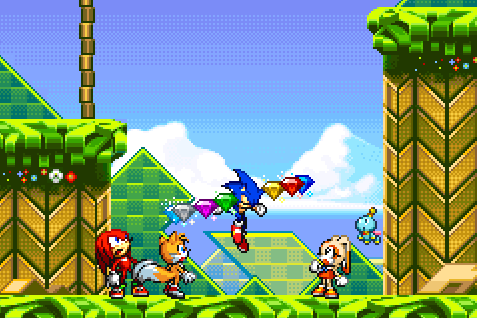 Lets have roll into an advanced romp and see what Sonic’s portable adventures offer.

Sonic didn’t just have his portable adventures on the Neo Geo Pocket Color and Nintendo handhelds but on SEGA handhelds back in the day. Sonic got 8-Bit conversions of Sonic the Hedgehog 1 & 2 for both the Master System and Game Gear, with both offering very different level designs and musical scores.

They focused more on traditional platforming but still having the speed factor Sonic is famous for. Both offer fun level design, with some stand outs being Sonic 1’s Bridge Zone and Sonic 2’s Sky High Zone. The former offers some amazing music with interesting platforming across large bridges while the later uses a fun hang-glider and pushes a lot high paths for skilled players. Overall, both have issues (mainly on the Game Gear versions with screen crunch making bosses harder then they need to be) but they are solid platformers that hold up well today.

Sonic got another series of platformers too, original titles built in mind for the Game Gear; Sonic Chaos & Triple Trouble or otherwise known in Japan as the Sonic & Tails Series. Both give have Sonic & Tails playable, with the former having is super peel out from CD and the later having his ability to fly from Sonic 3 & Knuckles. Level design focused more on speed, as the developers were able to design ‘trigger points’ where Sonic can go very fast through loops and did a solid job making sure moves like rolling and spin-dashing built up speed many know from Sonic.

Other noteworthy titles on the Game Gear include Tails’s own adventure with Tails’ Adventure being a fun Metroidvania-like experience & Sky Patrol being a fun little take on rail-shooters and portable versions of Mean Bean Machine & the GG-only Sonic Labyrinth which is fun despite Sonic not being able to run super fast.

The Game Gear is known for two very bad Sonic’s though; Sonic Blast and Sonic Spinball 8-Bit. The former is one of the worst games released in the Classic era with ugly visuals and really off controls while the later is a badly optimized game with odd controls compared to the Genesis version.

Overall, his run on the Game Gear led to some solid titles and was an indication that Sonic would fit nicely on stronger handheld hardware.

Now we flash-forward quite a few years and see the release of Sonic Advance 2. Dimps and Sonic Team wanted to push Sonic’s speed heavily with this game, with the introduction of the ‘Boost’. No, not the boost from Rush or Unleashed, I’m talking about the after-trail effect you see when you are running at your top speed. Sonic and company get this and go very fast when hitting high enough speeds and the reward the player gets is maintaining this speed for very fast runs.

It is a nice way to push the speed factor while maintaining the Genesis mindset and design mentality; you use momentum to push your speed and by going faster & faster, you are rewarded with a burst of speed. Levels are designed for this too, with high/middle/lower paths pushed toward a down-ward slope to keep up the speed and a new trick system being introduced with you pressing R (while holding right or up on the D-Pad) in gaining more speed or launch higher in the air.

Sonic Advance 2 is what pushed 2D Sonic to go ‘faster’ in many respects and it did that job well. But many remember Advance 2 for its amazing production values and great soundtrack, with the sprites having some great animation and the score having some very good themes. Sadly, its flawed, with Advance 2 having one of the most annoying unlocking systems for the ‘good ending’.

Basically, you need to slow down and memorize every single level to collect special rings to unlock a special stage & collect all seven chaos emeralds….and you have to do this four times to unlock the ‘true’ final boss. Advance 1 didn’t have this problem, only pushing you to find a special spring and that’s it. I had so much issue with this, I just beat the game and never bothered with this ‘good ending’. Overall, I love Advance 2 personally, but it has some issues.

Super Sonic Brawl’n & One Heck of a Spinball

After the release of Advance 2, we got two spin-off Sonic titles on the GBA, with both having Sonic Team developing them. Sonic Team did work on the Advance trilogy, but outside of overseeing production and having one of their composers making the score of Advance 3, Dimps did most of the work. These two games, Sonic Team fully made on there own.

Anyway, Sonic Battle is a fighting game which has the Sonic cast beating the heck out of each other using iconic moves like the spin-dash, chaos control and digging underground. But what makes the game great to me, is the story mode. Its a full plot with well written dialog, some funny moments and some great RPG systems where you can build your own fighter with the new character Emerl using moves and abilities from the entire playable cast. Story took some very interesting turns and overall, is a lot better then many of the mainline Sonic plots to be honest.

Battle mechanics have a good level of depth too, with launchers in addition to various multi-hit combos being rewarding to pull off. And you have R Specials that each character can equip before they spawn/respawn into battle. MP is something I never experienced due to not having many people interested in using that link cable but fighting against the CPU is good fun.

Battle was a great, content rich game that did a lot right outside of some odd difficulty balance issues during some of the story portions. Sonic Team then worked on a fun little pinball title using not just Sonic the Hedgehog but other titles they worked on in the past. Samba De Amigo, Phatasy Star Online, Burning Rangers, NiGHTS into Dreams; all of these were used in this pinball title.

Unlike Sonic’s fun spinball on the Genesis and Game Gear, this pinball game is a very basic title with three tables based on Sonic Advance, Samba De Amigo, & NiGHTS. But the main take away from this title is the musical score. Many doubt the GBA’s Sound Chip but Sonic Team can make the thing sing, with a large collection of music across Sonic Team’s titles being converted for GBA hardware in this game.

They are such great remixes, so going to be linking the entire soundtrack below.

Its a mix of tracks from Sonic Advance, NiGHTS, Samba De Amigo and even other IP like Burning Rangers and Chu Chu Rocket. The soundtrack is great here and a highlight to Sonic Pinball Party.

Sonic Advance 3 released in 2004 and is the ‘final’ original platformer for the GBA in the Sonic series. It has Sonic and friends trying to repair a shattered world after Eggman split it up into pieces….not unlike what he later does in Sonic Unleashed.

The gameplay is more of Advance 2 but with level design working with more platforming and the level design suffers a bit, as spike & hazard placement is not as polished compared to the past Advance games. Even some levels aren’t as fun compared to past Sonic platformers but overall, the levels are still mostly fun to run though.

Advance 3’s main gimmick is taking the idea of partners from Sonic 2 and the team-up system from Knuckles Chaotix and mashing them together. The result? The Tag-System. It is a system where you have a leader (who you play as) and a partner (AI buddy you can assist you by pressing the R Button when its held). It can be simple, like letting Sonic fly not unlike Sonic 3&K when a second player picked up the controller as Tails too being able to change movesets (Sonic gets a powerful kick when Knuckles is his partner or how Amy & Cream can use Trick moves from Sonic Advance 2 when pressing R in the air).

It makes playing and unlocking the other cast really fun and mixing & matching characters makes replaying levels a treat if you want to look for all the many paths you can take. The 100% is a issue again but not on the level of Advance 2’s. You have to collect X amount of Chao in each act and when you collect all of them, you can get a key (which spawns in a random spot of a stage) and when you get this key, you can unlock a spring in the hub worlds (will get to this soon) and then you get try for a Chaos Emerald. Like Advance 2, I felt it wasn’t worth it but for those interested in getting the good ending, you could try for this if you want to.

The game has a hub world system, where you can jump to the different acts via warp rings, jump through a giant ring to access menus (switching character & zones) and finding mini games to play. Its fun at first but can be a bit annoying when you just want to run to the next act but cannot find the warp ring. Thankfully, that is rarely an issue but just something to keep in mind.

Musically and the presentation overall, is very solid. Some of the best sprite work on the GBA and the soundtrack sounds fantastic. Sonic Team composers took the job this time out and it shows; sounds great with my personal favorite being Sunset Hill Zone, being a remixed version of Green Hill Zone. Will be linking to the full playlist below.

Overall, Advance 3 is the most flawed of the trilogy to me but I had a lot of fun with it overall. It did a lot right and was a nice cap off to Sonic’s Game Boy Advance run.

Thank you for reading this article everyone! It was fun writing about the positive parts of Sonic all this time…..but we gotta face the edge sometimes and fight some black arms. So, next up, we will be covering Shadow the Hedgehog but we will also be covering Sonic Rush & Sonic Riders to wash out that edge a bit.

Lets keep running and see you all soon!

"Celebrating An Anniversary - Sonic the Hedgehog Part V", 5 out of 5 based on 1 ratings.