Sonic the Hedgehog is a series that continued to improve as it got more releases back in the 90’s, with the series 2D run establishing the series strong track record as one of the best platformers on the market. With Sonic 1 and 2 being such successes, a lot was riding on Sonic 3 to be an even better experience.

With two massive games being locked-on to each other and new gameplay mechanics being added, does Sonic 3 & Knuckles continue to impress and continue the quality that past 2D Sonic’s established?

The story for Sonic 3 & Knuckles has Sonic and his buddy Tails visiting Angel Island on the hunt for Robotnik. They hear wind of him going to the island, so they follow him to foil any possible evil plans. Along the way, a new character Knuckles (guardian of the island Sonic & Taisl visit) knocks Super Sonic out and takes the Emeralds from him, laughing in Sonic’s face before running off.

So starts the long, epic 12 Zone adventure with Sonic & Tails exploring Angel Island’s locations to find the emeralds, fight Robotnik and find out what is Knuckles beef. What makes the story work so well, is that it’s all told through gameplay.

Every major scene before boss fights, major story beats toward the Sonic & Knuckles half of the game, and more are done really well. Through having natural transitions between the different acts within zones, it feels like a real world is happening right before your very eyes.

Having fire overtake Angel Island after fighting a robot at the end of Act 1, having the ground rumble and shift around during Act 2 of Marble Garden Zone, the entire last three zones as a whole; it feels cinematic but it doesn’t detract from the quality Sonic gameplay. Having a story that works so well within gameplay is impressive, more so from the time Sonic 3&K released.

The gameplay is almost 1-to-1 with Sonic 2 mechanically, as Sonic can spin-dash, roll and jump like before. Level design feels like a balance between Sonic CD’s focus on exploration and Sonic 2’s effort on keeping up your speed, leading to a really strong game design.

This is shown through the new Elemental Shield mechanic and playable Tails & Knuckles. The Elemental Shields are special shields that everyone can use….but Sonic has some unique abilities when using them.

This gives Sonic far more versatility and really pushes the exploration aspect; it feels great using the shields due to level design complementing them. You can take a water zone like Hyrdocity and make it feel much better to get through by not getting hit having the Water Shield. Or you can use the Electric shield in Angel Island Zone in getting to higher platforms. It gives Sonic new moves without complicating things; elegant game design at work.

Tails returns from Sonic 2 but he can fly in the air. Even better, you can plug in a second controller for player two and they can pick up Sonic and help him fly to higher spots. This is very helpful for the later zones, as you can find hard to find special rings. Get a buddy to pick up the second control and fly you up to a higher spot! 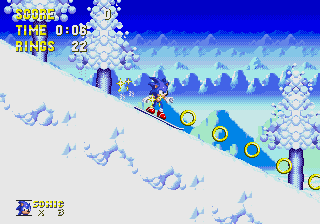 Lastly comes Knuckles, having the ability to glide in the air and climb walls, making him great for exploration like Tails. He can also smash through large rocks in some stages allowing you to get through paths Sonic & Tails cannot access. Some of these extra paths have new level design elements, making them like extra acts for plugging in Sonic 3 on-top of S&K.

This is how Sonic characters should all play; everyone having one core element making them unique, but still ‘feeling’ like Sonic. Tails and Knuckles can spin dash, roll and jump with no problem, making them added replay value for the game when you play through the game once with Sonic or Sonic & Tails.

The levels are all great with some creative themes. For example, you don’t start out in a green hill location but a tropical jungle, having new swinging gimmicks and some underwater sections if you explore enough. Another example is Ice Cap, as you start out snowboarding on hills, then you explore ice-filled caves. My favorite levels are Ice Cap, Angel Island and Lava Reef for how dynamic and fun they are. 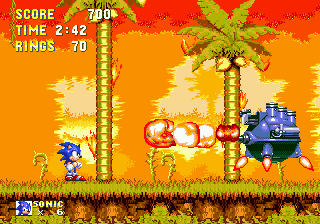 Sonic 3&K has a lot to offer outside of the main story though. You can collect the seven Chaos Emeralds like in past games but you also have the Super Emeralds, which you can only get when playing S3&K. They allow Tails to use a super form, Knuckles to get a super form, and it gives Sonic a bit of a power boost as Hyper Sonic.

Another example is a MP mode; You have more stages to play, racing modes are really fun and the levels loop during the racing mode. Sonic 3 & Knuckles is a game with not only a ton of content to play through, but also feels like one of the most polished & enjoyable 2D adventures in the series.

Sonic 3 & Knuckles continues having the quality sprite work seen from past 2D Genesis Sonic’s, with expressive characters, detailed backdrops and amazing musical score. Many of the level themes across both Sonic 3 & Sonic and Knuckles feel unique, greatly varring from past games. The series never had a snow level for example, making Ice Cap feel special to the series. Running at 60FPS and having no screen tearing, it was an impressive looking & running game at the time.

Music is one part of the game that shines very bright. Below are just some of the many tracks I loved from the game.

-Sonic 1: Blue Sphere – Due to emulation issues at the time, they couldn’t put Knuckles or Tails in Sonic 1. So despite the menu giving you this.

You can end up playing hundreds of special stages based on Sonic 3&K’s version of them. If you loved them with your time with them, then it’s a nice way to kill an hour or so.

-Sonic 3: Sonic 3 & Knuckles – You can play the intended game Sega and Sonic Team set out to create. You as Knuckles in every Sonic 3 stage while you can also play as Tails in every Sonic & Knuckles stage. This also unlocks the Doomsday boss fight (if you got the Chaos Emeralds or Super Emeralds) and access to the Super Emerald Special Stages.

This is very close to perfection that the Sonic series has reached back in the Genesis days, as this is hands down one of the best games in the series. Offering great level design, lots of content and surprisingly an engaging story that you want to see through the end; Sonic 3 & Knuckles is a game I continue to replay to this day. If you love 2D Platformers, I cannot recommend this title enough.