2016 is a year many franchises have had anniversary’s. Crash Bandicoot turning 20, Ratchet & Clank celebrating with a new game and movie, and of course, we have Sonic the Hedgehog. The series is famous for its daring gameplay styles and shifts over the years, with some very strong releases past and present.

Sonic originated as an effort from SEGA to try and compete with Super Mario, as they wanted to have a popular mascot for their SEGA brand and upcoming SEGA Genesis/Mega Drive. Various ideas were drawn for character ideas; a jolly man in pajamas, a rabbit with stretchy ears and even a mighty armadillo. But it was settled upon a blue hedgehog with red shoes, white gloves and Mickey Mouse-styled design; Sonic the Hedgehog was born.

Releasing in 1991 on the SEGA Genesis with a version releasing on SEGA’s Master System and Game Gear platforms, it set the foundation. Sonic can roll down hills and the faster he rolls, the higher he jumps and he can reach very fast speeds. Levels are built in mind for momentum based platforming and this was further explored upon with Sonic CD, Sonic 2 and Sonic 3 later on. And we are introduced to iconic themes the series would repeatedly revisit; a round man called Eggman captures little animals and turns them into Badniks that Sonic destroys to set his animal buddies free.

And the theme of nature vs. technology continues to be explored throughout a number of games in the series, with this really hitting home with Sonic the Hedgehog CD. Overall, Sonic 1 set the foundation for the series future and is a game many hold strong memories for.

Sonic’s adventures continue with three new adventures. Sonic 2 released in 1992 with its main goal being to give Sonic a great sense of speed and levels more focused on Sonic moving quickly. Sonic 1 had the Blue Blur running and jumping, but we had levels like Marble Zone and Labryinth Zone that prevented you from going your top speed. Sonic 2 fixes this with almost every level having a great sense of flow all the while continuing the momentum focused platforming that Sonic 1 established.

We also get introduced to Miles Tails Prower, a young two tailed fox who admires Sonic and follows him around after getting bullied. Sonic takes in the young fox and they quickly become an unbreakable team.

Sonic CD continues the series Sonic jumping on to the SEGA CD. This device allowed for FMV Video and CD quality audio. Sonic is a series known for pushing the boundaries for tech, so SEGA told their developers to push the hardware of the CD. This lead to the iconic introduction to the game with Sonic showing his full speed and ability alongside a nice conclusion scene rewarding you with a nice video showcasing every level in the game with Sonic running around.

The game also introduces two characters that would frequently pop up in the series; Amy Rose and Metal Sonic. The former is a pink hedgehog who fell in love with Sonic after seeing his work saving the day in Sonic 1 while Metal Sonic is a creation of Eggman that matches Sonic’s abilities. Metal Sonic is such an iconic foe for Sonic and his fight on Stardust Speedway is a highlight for many players of CD.

Gameplay to Sonic CD is like Sonic 1 but with the momentum gameplay being used effectivly as a strong gameplay mechanic. What does this mean? It means that levels are built for you to roll as much as you can to build up speed and fly through the level……or, go back in time to different versions of the same stage. 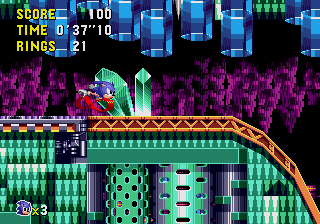 CD has a time travel mechanic that uses Sonic’s speed to activate it. You run past sign posts that have ‘Past’ and ‘Future’ written on them and if Sonic reaches a top speed, he can lightspeed warp into the past or future. This changes the goal of the level; instead of just going to the end of a stage, you hunt for a robot generator in the past before you move onward. Or, you could just collect the time stones.

In Sonic 1 and 2, you collected these things called ‘Chaos Emeralds’, which allow Sonic to become Super Sonic in Sonic 2. The special stages are very creative in the series and the Genesis Era of Sonic was wild with the special stages. Sonic CD’s has you taking out X amounts of UFO’s before the timer goes out. Once you get rid of them, you get one of seven time stones.

But you can get a bad future and they have harder foes to fight, while Good Futures have no robots to fight and the world looks futuristic in a clean way; machine vs. technology are in harmony instead of one taking over the other.

Sonic CD is famous for its soundtrack and before we go to Sonic 3. It is filled with amazing tracks and it is unique, as it has two soundtracks for different regions (NA and JP/EU). Most of the soundtrack will be linked here so give it a listen!

A Visit to Angel Island

Sonic gets another adventure on the Genesis through Sonic the Hedgehog 3 ……and Knuckles. We are introduced to another face for Sonic to interact with, as he is the guardian of the master emerald, a gem that allows an island called Angel Island to float in the sky.

Eggman wants the Master Emerald and the hidden Super Emeralds to power his device, the Death Egg, to take over the world. Sonic and Tails head to the island to stop his plans but a tricked Knuckles takes the Chaos Emeralds and chuckles away. So Sonic and Tails must explore uncharted locations while facing Eggman and Knuckles along the way.

This game was big and so large in scope, they had to split it up into two carts. Not to mention it added so much to the series formula. There is a great balance between speed and platforming, Knuckles and Tails have unique features the set them apart from Sonic, the elemental shields were a great mechanic that pushed for you to avoid getting hit use extra moves for Sonic and a second set of emeralds to collect made special stages all the more rewarding.

Sonic 3 & Knuckles is considered a masterpiece by many across the world and a game I highly suggest you play to celebrate the Blue Blurs birthday this month.

So, that is it for our run through the Classic Era of Sonic, but we have some more games to cover in the series, so stay tuned for more articles covering the Blue Blur later this month.