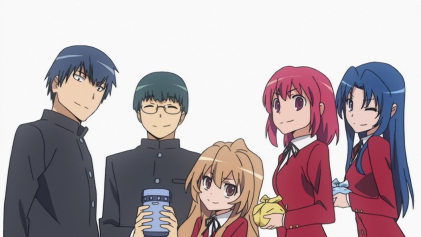 Anime explores a number of subject maters; action packed shows filled with adventures, more thought provoking shows that make you think about things and more. One genre is the romance anime, where we are rooting for the two main characters to connect with many challenges in their way. Sometimes this is done badly and that makes the show suffer greatly. But when its done right, the show can really pull those heart strings.

Toradora is one of those anime and it nails everything it sets out to do in many aspects.

The story of the show follows our two main leads, Ryūji Takasu who is a kind guy with an excessive cleaning habit with a thuggish looking face and Taiga Aisaka who is an short girl with quite a short temper. Both have strong crushes on the others best friend and after some events happen between them, they work together to make their dream romances happen.

What makes this set up work so well, is that the main romance between Ryuji and Taiga is on track the moment the show starts, but we are still interested to see how their dream romances are going to pan out. In addition to that factor, we have both characters being very strong on their own and with each other; they have perfect chemistry and when both are together great humor ensures.

Taiga deserves special mention in this case, as she steals every single scene she is in. Her short temper and explosive personality make you wonder what she is going to do next or how will she react to the world around her. She is where much of the shows humor comes from and it is really funny.

Other side characters include their best friends Yusaku Kitamura and Minori Kushieda, with both having great roles within the show. The former is Ryuji’s closest friend and his interactions with everyone are just as interesting to see play out. The later is Taiga’s best friend and starts off simple with her happy personality implying she is content with everything. However, the reality we later learn on is very interesting and gives her character a lot of depth.

The last notable character to talk about is Ami Kawashima, with her being the third romance object in Ryuji’s love triangle. She is kind to people on the outside, but the reality is that she doesn’t like many people and puts up a face. As she becomes friends with the main cast and functions within the show, she becomes the viewer regarding where each romance is going to end up; she knows more then she initially lets on.

With all these factors, how does the end story play out? Going to avoid spoilers in this review but I will just say that it goes in a number of directions you do not expect and some real heartbreaking scenes toward the middle/end of the show really make you invested.

The final three episodes play out beautifully and the ending as a whole is very rewarding overall.

The show’s presentation is strong, with great animation work across the board. The scenes where the animation sings is during a few specific scenes like action moments, when emotions hit an head and truths are announced. Most of the time, the animation still looks great but it knows when to be impressive.

Musically, the show is solid with a number of specific songs like the introduction theme and a specific song towards the middle of the show are fantastic.

The dub is something I need to talk about, as unlike my other reviews, I watched both the JP and English Dubs for this show. Toradora’s JP dub is great with Taiga’s voice being perfect in her role. I couldn’t stop laughing whenever she lashed out at others. The English Dub is very impressive too, with every character matching the new voices and while I prefer the JP Dub’s version of Taiga, I was very impressed with the English Dub version of her.

Overall, this show is a must watch for anyone interested in anime. The show is skillful when playing with emotions and having drama for its characters. I loved the show for the entirety and highly recommend you buy it and fully watch the entire series. It does so much right and you will love the characters a lot, rooting for them to find their happiness.

If you want to buy the entire series, it is a great idea as the show is very good. But options for streaming on Hulu and Crunchyroll are also available.