If you read my review on Sword Art Online Season 1, then saying I had mixed opinions on the show is an understatement. It was all over the place quality wise and as a result, many felt torn on the series going forward.

But many of the writers and the creator of the IP wanted to fix the series and turn it around with new projects. Two being Hollow Fragment on Vita (with it getting a PS4 version later on) and the adaptation of the next three arcs of the series with Season Two.

Does this season fix the issues the first one had? Or is it somehow worse?

The first arc is that of the Gun Gale Online MMO, with a new player called ‘Death Gun’ killing players in the game by shooting at them. It is clear that his name and method of killing is a nod to the famous anime ‘Death Note’ but lets move on.

Kirito is famous for being ‘the hero of SAO’ and head government officials that talked to him after the events of SAO Season One come up to him again asking for him to go inside this new MMO Gun Gale Online to take him out and stop the deaths from happening. After learning he would be getting paid for his services, Kirtio agrees and LINK STARTS into a new MMO.

While this happens, Kirito’s harem….I mean female friends are playing ALO still. In addition, a new female player with a tragic backstory called Sinon is playing Gun Gale Online in an effort to cope with her PTSD with guns. 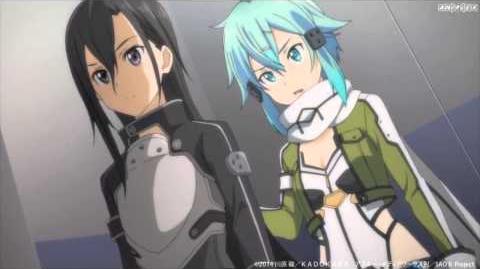 This set up is much stronger then Season One as a whole, as instead of time skipping and the focus being all over the place, it is just locked on one single goal; taking out Death Gun. By doing this, the writers can focus on the characters trying to solve one problem and the issue of rushing through things is gone. By the time this arc is over, every question is answered and you feel happy with it all.

The world of Gun Gale Online is very interesting, as despite how dark and drab it starts looking, the games world still has the bright colors and vivid gradients that both locations in Season One had. The cast is strong here too, with Kirito having more interesting stuff to work with like him coming to terms with killing people in SAO and Sinon overcoming her PTSD by the end of the arc.

It has issues, with problems I had with Asuna in the second half of Season One coming back at the arcs final episode. The idea of putting female characters in sexually violating situations is not done well here and it is very dumb considering how much stuff the series was getting right up to that point.

Kirito is also less consistent here, as while I liked him coming to terms with killing people in SAO, it is through a new flashback that we never saw in Season One. I mean that is fine, as it gave context, but they could of used any death scene in Season One already instead of that.

Overall, it was solid and better than the first half of Season One.

The second arc is a filler one, with Kirito and friends going out to get a powerful sword in ALO. It was nice seeing the cast come together again for three episodes despite the stakes being very minor in the larger story line of the show.

Issues with the series are still present, with the female cast still being attached to Kirito’s finger and Sinon sadly being another member of his harem. Not a problem, but sad to see clear issues not being resolved. The actions scenes here are fun though and it was nice seeing the world of ALO without all the horrid stuff we experienced in the second half of Season One.

The final arc of the seasons is the Mothers Rosario arc and it is the best thing ever released from SAO. It covers Asuna’s life after the events of Season One and playing ALO with everyone, but encountering a new player called Yuuki. She is the most powerful player in the game and wants Asuna to work with her to get her guild on a special wall.

The importance of this? Their lives on on a timer and Yuuki has AIDS; she is slowly dying. They explore this subject with a lot of respect and seriousness, to the point where I was heartbroken by the end of the season.

SAO has the potential to explore darker stories and the first half of Season One tried doing this but failed (death in game = death in real life). But Season Two tries hard to fix many issues Season One had.

The Mother Rosario Arc is the result of this and it does everything right; supporting characters have purpose, Asuna is a compelling main character to the end, Kirito has a great supporting role toward the end of the arc, and Yuki is one of the best characters in the SAO series.

If the entire season was this level of quality, we would of gotten on of the better anime shows of the 2014 season. And to be fair, this takes up a large chunk of the season (5-6 episodes), so it does make up a large amount of the show in length.

Presentation and sound is just as great as it was in Season One. The fights are great and rewarding, the overall animation is consistently great, and the different settings are all well realized.

I watched the show in both JP and English this time out too, and the English VA’s were okay. They sound very different from the JP VA’s and it was off putting at first. But they do match and with the stronger material this season they had to work with, it shows how solid their voice acting for these characters are.

I still prefer the JP VA’s because I’m used to them from Season One however. But I have no issue swapping between the different dubs overall.

I have to applaud Sword Art Online II a lot, as it fixes many issues I had with Season One. The characters are more consistent, the plots are a lot stronger and they took time to build the plots/worlds they used this time out. While I had issues recommending Season One, I have no issues saying you should watch Season Two. It HAS issues still, mainly in the first two arcs.

But they are nothing compared to the issues I had with Season One as a whole. It is like SAO II is a completely different beast. Recommend watching at least the Mothers Rosario Arc and if you enjoy that, you should enjoy the other two arcs of this Season.

It is on Netflix and Crunchyroll with both English and JP dubs.