Mighty No. 9 is a game that released today, June 21st on PlayStation 4, PlayStation 3, Nintendo Wii U, Xbox One and PC. It also has upcoming releases on Xbox 360 (coming soon; pushed back due to bug problems), Nintendo 3DS and PlayStation Vita as well. The game is a very interesting case, as it was one of the first ‘big’ Kickstarter projects and had a big named attached to the project through Inafune. But after its long struggle to the finish line, the end result is something many are very mixed on. So for this long article, we will be diving into the history, development and recent issues surrounding Mighty No. 9.

I need to preface this article with the following though: Due to the nature of this discussion, I might be negative or critical of the title. I know that is obvious from the title of this article, but for people who never played this game before, I encourage you give the game a fair shot; you might enjoy it a lot and I don’t want my article to take any enjoyment from you.

With that out of the way, lets take out our Mega Busters and run through the history, development and more of Mighty No. 9!

You cannot talk about Mighty No. 9 without talking about Mega Man, the iconic jump n’shoot series from Capcom. It is a series that spans decades of titles across many different sub series. Mega Man is Capcom’s mascot but he stopped selling amazingly well compared to the past. By 2008, Mega Man sales slowed down and titles like ZX Advent & the Star Force series sold well but nothing compared to Battle Network on the GBA or Classic series on Nintendo systems.

What Capcom did was go back to the roots of Mega Man in 2009 after seeing the success of Nintendo’s VC service and launched Mega Man 9 on WiiWare, PlayStation Network, and Xbox Live Arcade. It was 8-Bit like the series past titles on the NES, had the iconic jump n’ shoot gameplay you expect and it was a high quality adventure. It was a success and a year later Inti-Crates made another Classic Mega Man through Mega Man 10. It also did well sales wise and Capcom commissioned more Mega Man titles to be developed.

Inafune was the series producer at the time and started work on four projects with many different studios; Inti-Crates was going to develop another Mega Man title called Universe, building off of what Powered Up did. Inafune worked with internal Capcom staff on a sequel to Mega Man Legends 2 for Nintendo’s recently announced 3DS platform. And he worked with two other studios to make a Mega Man MMO for Korea & a FPS take on the Mega Man X series from Armapture (founded from former Metroid Prime developers).

All of these sound promising…..but they never happened. Inafune was responsible for ‘pushing’ Capcom into different directions, with a push on Western Studios making JP IP like Bionic Commando (2009), DmC (2013) and more. This lead to some of those games not selling very well, and Capcom looked at Inafune with a serious fact; he costed them too much money with his decision making. He famously developed Lost Planet and Dead Rising for the 360 behind Capcom’s back for example. Both settled things calmly, with Infanue leaving Capcom. 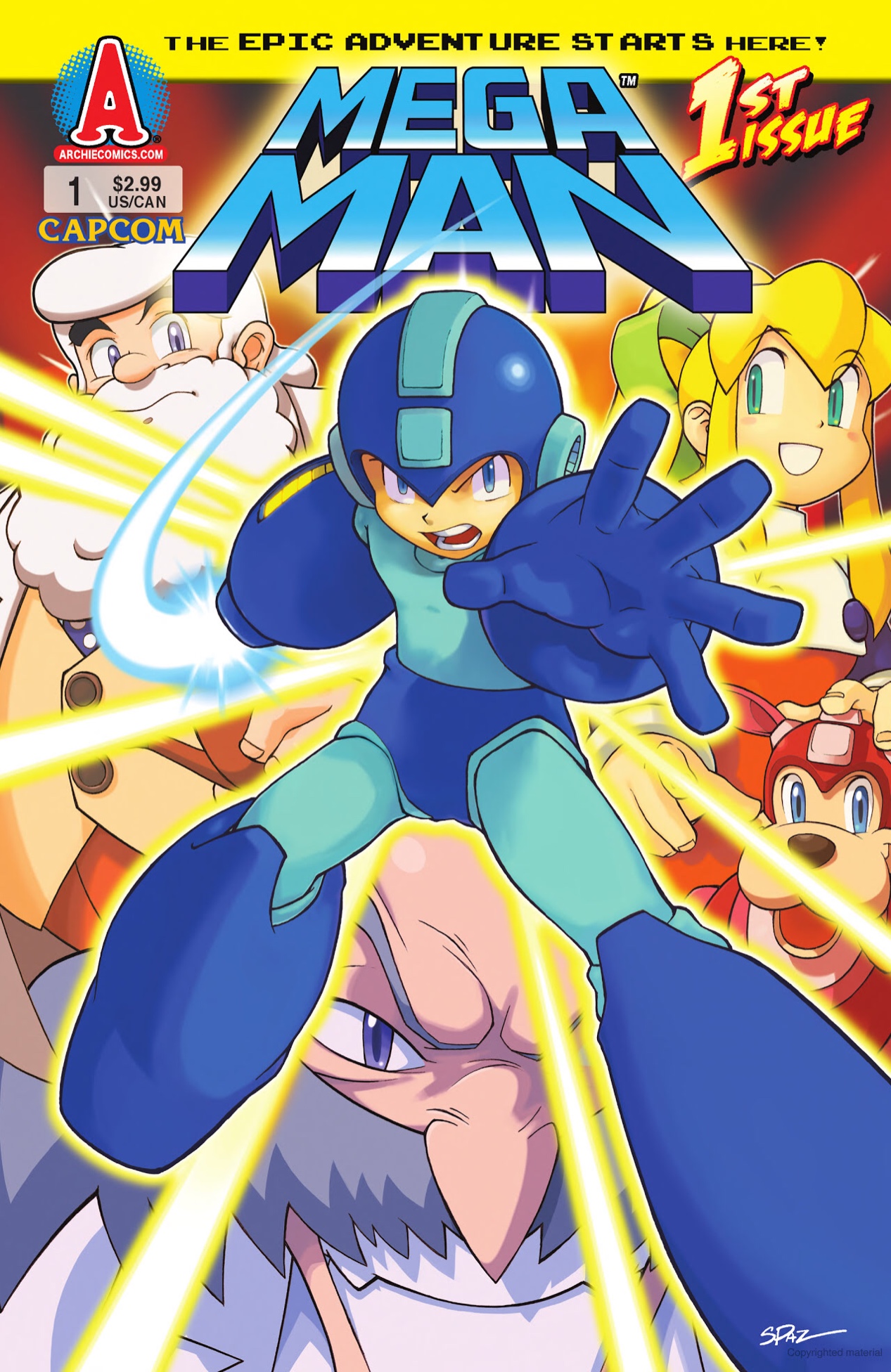 Capcom, seeing his Mega Man titles costing too much money and taking the fact that the series wasn’t selling very well, decided to scrap all four projects with Mega Man and put the IP on hold for a while. This meant the Blue Bomber we saw everywhere, took a long break. He came back in 2014 with Super Smash Brothers through his guest appearance, got a number of his games across a number of sub series releasing on Nintendo and Sony’s platforms through the PSN & E-Shop, got a new collection of his NES adventures on modern platforms and has a new cartoon coming next year. He even got a comic made by the Sonic Comic’s team at Archie Comics.

Mighty Successor: Model No. 9 is Born

Capcom may have had clear reasons for putting the Mega Man series on hold for a few years, but they handled the situation badly, with fans being very bitter with the company. Infaune capitalized on this in 2013 with the announcement of a new Kickstarter Project: Mighty No. 9.

He wanted to bring back his ideas of Mega Man Universe with a new Mega Man adventure happening, but this time, with robot named Beck. Beck is Mighty No. 9, with the ability to use his Xells to dash through objects and being able to assimilate robot abilities, making them his own. This mechanic was promised to extend to other robots outside of the main Mighty Numbers (games version of robot masters from Mega Man) but the final game changes this with a special ‘upgrade’ system, which has robots you normally fight off one of three abilities; armor, speed and power. Each one stacks and last a short amount of time.

Anyway, it looked very promising and people were so hungry for a new Mega Man title, they stormed Kickstarter to fund the Inafune project. It got up to 3.8 Million with every stretch goal meet. People were so happy with this Kickstarter, and with the team behind the project having past experience with the Mega Man series inspired further confidence. Inti-Creates developed the title and worked on the Zero Series, MM9 & 10 and the ZX series, showing past experience working with the Mega Man IP.

People were happy with how the game looked, how the game played and were looking forward to more Mega Man action in 2014. It made Kickstarter a major platform for Indie Studios, showing that you can work with the community to fund your projects rather then only relying on a publisher.

Mighty Hype Dying Down – Other Kickstarters and Development Hurdles

So, with everything looking so promising, what can go wrong? Everything can go wrong sadly. Infaune wanted to make Mighty No. 9 a massive IP, rather then a fun little platformer succeeding Mega Man. This lead to him announcing plans for a Cartoon, Movie, & another Kickstarter for extra features for the base Kickstarter after it got funded. People were scratching their heads, wondering how much work Inafune was putting into the game if he was dabbing his foot in other waters well before the games launch.

Things got worse when the game was pushed back three times across its life as a Kickstarter and gameplay started coming out. It looked ‘off’, as the concept art looked like this.

People felt mislead and lied too, enough to the point where anger toward the project started forming. Inafune and Concept did clear up that the concept art was just an idea for the game, but that isn’t a fair argument when later Kickstarts like Bloodstained accomplished retaining the art style pitched to backers.

Matters got even worse when another Kickstarter from Comcept & Inafune called ‘Red Ash’ came out and it being two Kickstarters; one for the game and another for a anime based on the new IP. People wanted to play Mighty No. 9 already, as at this point, the game was pushed back twice. Red Ash was going to be a Mega Man Legends successor, even having the same characters as Mighty No. 9. Inafune thinks Mighty No. 9 will be the new Mega Man, enough where the same name can migrate over to other IP’s he works on.

It looked promising, but it was a badly managed Kickstarter and was not funded. FUZE, a out-of-nowhere publisher came in to publish the title and its coming out in the future. They even got help to fully fund the anime.

But people’s trust in Inafune was at an all-time low. Press played Mighty No. 9 at this point and found it to be a solid platformer, living up to the Mega Man name. So was the project shaping up badly, or was it Inafune’s toxic name running things now?

The game was pushed back yet again to Spring…I’m sorry, I mean Summer 2016 since the game is out now in June (which is summer). Why did this happen? Because of the online features of the game needing to be fully finished before the game releases. At this point, the game was content complete with early alpha’s and beta’s in the hands of backers and developers. Even Inti-Creates washed their hands from the project, working on titles like Mighty Gunvolt and assisting WayForward with the Shantae series for both Pirates Curse in 2014 and Half-Genie Hero releasing later this year.

People hated the game at this point, with Mighty No. 9 being a joke instead of the return of Mega Man. More so with Mega Man coming back bit by bit over the past few years with re-releases and cameo’s in comics & games.

Mighty No. 9 finally released June 21st but not without problems. The game went into the hands of critics before the backers, frame rate & performance issues plaguing all versions of the game, and many issues people pointing out not being fixed in the released product.

Also….the less mentioned about the promotion of the game, the better. Just watch the below video.

Everyone cried like an anime fan on prom night, more so from apathy toward the game rather then being upset over the game itself.

Mighty No. 9 – Is It A Good Game? Does it Surpass the Legacy of the Blue Bomber?

With Inafune saying the final game issues and all is ‘better then nothing’ (though this quote could be mistranslated), many gamers feeling sour on the title and fans of the Blue Bomber not being too fond of the title, I would hazard to guess the game fails to accomplish its goal.

I will be reviewing the game on this site in the future, but I will just say…..I feel disappointed. More so with many people making the game knowing how to make a great Mega Man title. Most people should have been happy with the game, not upset.

It is a big lesson for the industry, saying that always be careful where you invest money into; not every Kickstarter out there is going to be a strong success like Shovel Knight, Shantae or Hyper Light Drifter.

What is next for Mighty No. 9?

With the cartoon and movie progressing along in addition to Inafune expressing interest in a sequel, more is on the way for the IP. I hope that future ventures for Mighty No. 9 continue to improve upon the mistakes presented in the final game. Until then though, we have a mighty disappointment that might have a few bright spots here and there for those willing to give the game a fair chance despite its troubled production & history among the gaming community.

0 Comments on “Mighty No. 9’s Toxic Battle To Completion – Retrospective on the Games Development History”