We continue our celebration of the Sonic series with a long article covering Sonic’s life on the SEGA Dreamcast and his introduction to Nintendo platforms. This is where everything changes for Sonic, and the time where the series experiments with a lot of new features. But it is still Sonic at its core and many hold fond memories of his run on the Dreamcast and his first GameCube adventure.

Open Your Heart, It Will Be Alright

This is a massive game for the series. Sonic Adventure originated as a Sega ****** game, code-named Sonic & Knuckles RPG but due to a push from Sega to work with an upcoming console (Dreamcast) and Sonic Team themselves interested with the stronger hardware, they decided “Lets launch Sonic with the system”.

Fast forward to 1998 and for the Japanese launch of the Dreamcast, the Blue Blur launched alongside it. It came to EU/NA gamers in 1999 thanks to Sonic Team USA taking time to gut the bugs/glitches from the original JP release (with that being dub “International Version” for JP in a later re-release).

This game changed……everything for Sonic. Sonic & Friends having new designs, the music direction shifting, the world expanding include human characters, hubs to explore and being an honest effort to translated the fun 2D Sonic gameplay into the third dimension.

A lot was riding on this title, with it being the first major Sonic game since…..in many respects, Sonic & Knuckles in 1994. We got games like Sonic Jam,Sonic R, 3D Blast and Sonic the Fighters but not a mainline platforming adventure.

The story of the game took a lot of lore from the series past in some key aspects. One being us learning more about Knuckles species and seeing humans for the first time in the Sonic series besides Eggman (though they were present in past titles, just in the background). Speaking of Eggman, that was his name in Japan and the western markets localized that name into Robotnik and it stuck for a while. But Sonic Team combined his West and JP name into Dr. Ivo ‘Eggman’ Robotnik.

Sonic and friends also got some redesigns too, with many of them getting taller, having new eye colors and more. But Sonic’s design in-game mirrors his Classic look far more then the promotal art leads you to believe.

The way stages work in Sonic Adventure is that we have 11 Zones, but depending on the character, it determines if they go to it or not.

Sonic will go through 10 zones but will never see Hot Shelter, while Tails will not go to zones like Lost World and Final Egg for example. This allows focus to be given to each characters visits, ensuring their level layouts are different enough from each other.

Sonic makes up the majority of the game with him having a full adventure with him running through 10 zones.

The level design of the game is strong and heavily invokes memories and mechanics from past titles. You have ramps you can spin-dash off of to gain great height, lots of loops to run through and most importantly, Sonic’s first escape from the dreaded whale in Emerald Coast. This being comes back to hunt the blue blur in a lot of future games.

Sonic’s gameplay is a literal rip of the Genesis era Sonic titles, but make them work in 3D. Sonic keeps momentum when going down hill, he slows down when running up hill, and your spin-dash has a lot of momentum and is instant. You press it and BAM Sonic starts rolling. It feels great and honestly……its the best control Sonic has ever got in the 3D realm to me. I may love Colors, Heroes, Unleashed and other 3D games, but Sonic’s core control has never felt as ‘tight’ or close to the original Genesis games as it does here.

And the level designs are built for this in mind! Windy Valley has long downward paths that build up your speed, you can run on the walls in Speed Highway, you can spin-dash at the inclines in Ice Cap to launch yourself to a massive short cut…….it feels great to run through these levels.

The fact we got 10 of these stages is amazing and this works for Tails & Knuckles as well. They do things a bit differently (Tails stages are races in Sonic-like levels while Knuckles explores for Emerald Shards) but they are still designed like Sonic levels. You have lots of paths to take and in Knuckles case, you have working Emerald Radar! Makes his time here enjoyable vs. SA2’s treasure hunting zones.

You also have other characters to play as like Amy Rose, Gama, and Big the Cat; all playing different from Sonic. One great thing about Adventure is that each character has a specific amount of stages: Sonic: 10 / Tails: 5 / Knuckles: 4 / Amy: 3 / Gama: 5 / Big: 4

This means that while the other characters have some screen time, the main focus is squarely on Sonic’s Adventure so the extra styles don’t take up that much time in all honestly. Even then though, the other styles are mostly solid. Tails & Knuckles are fun to play as while Amy & Gama have enough to them in making them fun.

Lastly, I want to talk about the music of Adventure. It is filled with great tracks and the opening theme of Open Your Heart was a great introduction to vocal tracks for Sonic’s Jump into 3D. Other noteworthy tracks include Emerald Coast, Speed Highway and Lost World. The full soundtrack is linked here, so give that a listen.

Overall, Adventure is a solid attempt at bringing Sonic to 3D and one that many at the time thought was ground breaking. While it aged a bit badly today, I still consider this one of my favorite 3D titles in the series.

Sonic got another adventure on the Dreamcast through Sonic Adventure 2. This game looked very promising to many, with it promising to focus on the great parts of Adventure 1 but making them stronger. Only three gameplay styles instead of six, removing the hub worlds, having a ‘darker’ story line and even hinting at a branching story line; it was going to be one of Sonic’s biggest adventures. 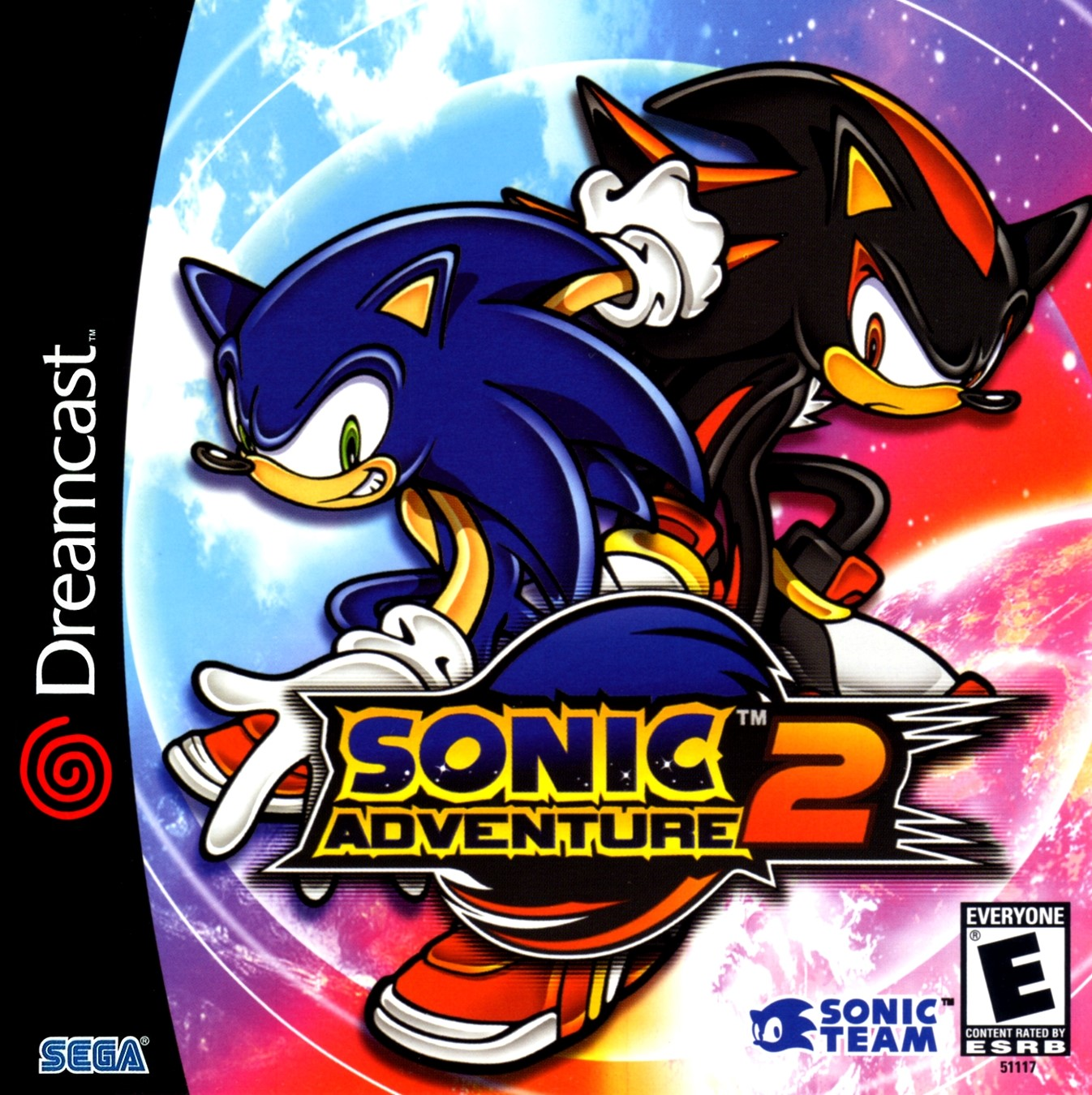 They scrapped the branching story but everything promised was in the final game, with the game releasing in 2001 to critical acclaim. But the question is, does it hold up today?

But, the game has a bit a personal connection to me, with me sharing this story during the games Retrospective:

Growing up, I had horrible frustration problems and I couldn’t play any video games without getting upset. Didn’t know how to jump in Yoshi’s Story, snapped the Spyro 1 disk in half after getting frustrated during a level, got lost badly in Pokemon Gold……the list sadly goes on. I own many systems during this period of my life too (Dreamcast, GBC, PS1, PS2, ect) and the fact I couldn’t enjoy them bothers me when looking back.

But something pushed me into asking for a Nintendo GameCube and my mom had no issue; 100+ bucks latter and she came home with Sonic Mega Collection and the Purple Lunchbox. I loved playing the classic games but I asked for more Sonic games. My mom found Adventure 2 in a store and said ‘Why not”. She brought it home, I put the game in and……my love of gaming was restored and whatever caused my frustration, just…vanished.

It was magical when I played City Escape; everything clicked. Sonic felt great to control, it felt so fast, sliding down the city on that snowboard rocked and it was the most fun I ever had with a game. I enjoyed the rest of the game but that was the most vivid memory of my time with Adventure 2 growing up; City Escape. Such a good first impression.

So, the game has a strong connection to me! But I can be critical of the game, so lets dive into the gameplay. It has the Speed (Sonic), Hunting (Knuckles) and Shooting (Gama) styles from Sonic Adventure but more ‘focused’ in different ways.

Sonic has levels more linear, focusing on getting through stages at the fastest speed possible outside of just exploring the different levels. This comes with some issues, as the focus on linear platforming removes the exploration that Adventure’s stages had but its less of a problem, but more of a personal preference in my case.

Shooting levels for Tails/Eggman are worse then Adventure but not really at the same time. In Adventure Gama felt like a Sonic character; moving fast and shooting swiftly. Here, the walkers move slow and have a lot of weight to them and while its a preference thing, it limits level design. Meaning, you move a lot slower in these stages here, then you did in Adventure.

The story here is solid, with it being ‘dark’ but that done well. It has plot holes and issues clearly, but it was done well. But the translation from JP too English lead to some funny lip syncing issues.

Musically and Graphically however, Adventure 2 shines very bright. Running at 60FPS with no drops, having higher-poly character models compared to SA1 and its amazing soundtrack blasting as you run through stages makes the game a great showcase for both the Dreamcast and GameCube.

Note how I say GameCube there, as Sonic moved from SEGA Systems to other platforms once SEGA discontinued the Dreamcast due to low sales. This meant Sonic finding new homes on Nintendo, Xbox and Sony platforms, with Sonic’s first console title after Adventure 2…..being a port of Adventure 2.

Adventure 2 Battle has more content for the MP modes with extra characters being unlocked from the start and it having functionality with the GBA. It was the game many, like myself, grew up with and was the introduction of the Sonic the Hedgehog IP for Nintendo gamers.

After Adventure 1 & 2, what awaits Sonic? A few great gems on the Game Boy Advance and his first multi-platform mainline adventure on all three home consoles at the time. Stay tuned tomorrow for some super powered teamwork, some advanced processing and some Super Sonic battling!