Sonic the Hedgehog is a franchise that spawned a number of fan-related productions. The fantastic Sonic Before the Sequel and Sonic After the Sequel come to mind. But what happens when you take that fan production you have in the works…..and turn it into something brand new, creative and fresh all the while taking inspiration from the source you highly respect.

Welcome to GalaxyTrails Freedom Planet, a 2D Action Platformer that is a love letter to everything on the SEGA Genesis. The game blends a lot of different elements but does so in very clever ways to make it feel unique and special.

Freedom Planet has a deep story that follows the Dragon Lilac and her friends adventures to defend there home from Lord Baron and his various supporters. With voice acting for all of the cast, cut-scenes that extend up too five minutes and detailed & unique sprites for some story events the game takes great care in the construction of its story.

But it is weak at some points, with the story not being paced well enough gameplay length; you could play through three levels and then get stuck with five minutes of story content. And the tone is a bit all over the place, with it being light hearted one scene then the next having our main character get attacked by the main foe.

It has charm and it is clear effort was put into making a great story with a lot of colorful characters. I enjoyed the story despite the issues it has.

The game is as if you blended Sonic the Hedgehog’s Level Design, Speed Focus & Physics Systems with Gunstar Heroes boss fights & Ristar‘s Shooting Star Mechanic. Sounds like a mess but that is not the case at all; everything comes together beautifully.

You have three playable characters and they all encounter the same levels, so you just pick one at the start of the game and can start running through the world soon after. Lilac is the games ‘Sonic’ if that makes sense; she can move very fast, has a double jump and a dash ability called the Dragon Boost that launches you forward or diagonally, & has a multitude of melee attacks. She is one of the best characters in the game as the levels work very well with her mechanics & abilities, allowing them to feel the most enjoyable with her.

We have two other characters too, one being Carol and another being the unlockable Milla. Carol has the ability to use melee attacks like Lilac and can match her speed using her motocycle power up. She even has a wall jump ala Mega Man X and rolling ability not unlike a blue hedgehog. Milla is interesting, as she is the slowest but has the easiest time with platforming; she can hover in the air with a flutter jump and can use projectile attacks with blocks she can toss at foes. But they have short reach, making bosses much harder for her

With these three characters, the game’s levels work very similar to Sonic 3 & Knuckles; open and full of secrets to explore but fun for every playable character. You have upper and lower paths you can take, making levels very replayable. One goal in each level you collecting cards, which can unlock concept art or music tracks you can listen too. 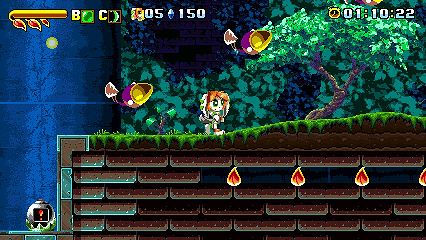 Level gimmicks here are a ton of fun, like using floating flowers to hover in the air a bit, riding on a dragoon in a shoot ’em up section later in the game and taking out ships one by one. This leads to levels never feeling stale. But one thing that makes the gameplay fun, is the boss fights. They are action packed, filled with things to dodge and are just really hectic. They are ripped right out a Treasure title like Gunstar Heroes or Astro Boy: The Omega Factor, leading them feeling so rewarding to defeat.

The gameplay and design here are remarkably strong, as Galaxytrail got so much right on this front. My only issue with the game is the controls on PC, as if you don’t have a standard controller, you might have issue adapting to the games controls. You can edit your control set up in the options menu to work in your liking and it works with most PC Controllers.

The game also has different modes like an time attack mode where you rush through the stages to record your best time, Steam Achievements to get, and tons of cards to collect in the many different levels.

Overall, you are getting a healthy amount of content with Freedom Planet.

Freedom Planet is a game that feels ripped out of a Genesis or ****** with its look and style; it screams classic SEGA. Bright colors with detailed sprite work, characters having a lot of personality with idle animations, and lots of effects & detail happening in the many levels you run through.

The musical score also matches what you would expect from a Sonic-like title, as it was composed by BlueWarrior & Woofle. Many levels like Relic Maze 1 or Sky Battalion are full of energy and have catchy melodies, with boss tracks like Major Boss Battle really fitting the mood of the fight. It is a fantastic score and one I love listening to both in & outside of the game.

Regarding the games performance on PC, the game runs very well on most modest set ups, with a 60FPS frame rate being easy to get on most computers. The Wii U version reportedly runs well too.

In this review I consistently mentioned Sonic. But its hard to not mention the iconic Blue Hedgehog when talking about Freedom Planet, as this feels like the spiritual successor to Sonic in a few ways. The presentation is vivid with colors and detail, music is a joy to listen too and the core gameplay is very strong. Freedom Planet is one of the best 2D action-platformers out there and it scratches that SEGA itch one might have. Highly recommend the game if you enjoyed Genesis/Mega Drive titles in the past.

This game was reviewed on the PC. You can get the game now on the Nintendo Wii U as well.