Sonic the Hedgehog had a bit of a transitional phase after the release of Sonic Adventure 2, as not long after that release, the Dreamcast sadly ended regarding SEGA first party support (mostly, it got a Pyuo Pop game at some point later on) and they started making games on Sony, Microsoft and Nintendo platforms. This was a big shift for Sonic and after the release of Adventure 2 Battle on the GC, Sonic got a brand new adventure……with it paying homage to the Genesis Era of the series but using a lot of the mechanics/features the Adventure games did.

Lets pay a visit some green-ish hills and run through a Heroic adventure all the while looking back on a pocket adventure & Sonic’s first Game Boy Advance venture.

Like his home company of SEGA, Sonic was scratching his head after the demise of the Dreamcast. Sure, he shook Mario’s hand and rolled through his two Dreamcast adventures again on the GameCube to get some footing but now he had to go on a brand new journey, but this time, across the Microsoft Xbox and Sony PlayStation. The later, was the platform that killed the Dreamcast in some respects.

To make this big move work, SEGA and Sonic Team USA decided to re-introduce Sonic to all gamers and to do this, they went back to the roots. By using the core Adventure gameplay style (Sonic’s gameplay) but blending it with some team mechanics and the visual design & simplicity of the Genesis Era Sonics, we got Sonic Heroes.

This multiplatform adventure has the largest playable cast in the series, with 12 playable characters. Before you say the words ‘Sonic’s Stu…..’, they all control the same, with each of the 12 split up into 4 teams. We have Team Sonic (Sonic, Tails, Knuckles – Medium Difficulty), Team Dark (Shadow, Rouge, Omega – Hard Difficulty), Team Rose (Amy, Cream, Big – Easy Difficulty) & Team Chaotix (Espio, Charmy, Vector). Each team has three formations of Speed, Flight and Power and they control at different movement speeds with unique abilities.

For example, Tails could fly everyone but the team moves slow while Sonic moves fast in a line-like formation with the team at the expense of very loose controls. Its a give and take system but it works thanks to the ability to swap team members with the X/Y buttons (in the GameCube version), making the controls more then fine.

Level design also takes a nod to the Genesis Era, with paths having high/middle/low points making each level have a lot of exploration. Locations like Frog Forest or Casino Park have so many different paths that they are so much fun to revisit. Visually, the game screams ‘Classic Sonic’ with SEGA’s iconic Blue Skies and beautiful locations that still hold up really well today. From the haunted halls of Mystic Mansion too the hundreds of floating rails in Rail Canyon, I loved the looks of these levels. 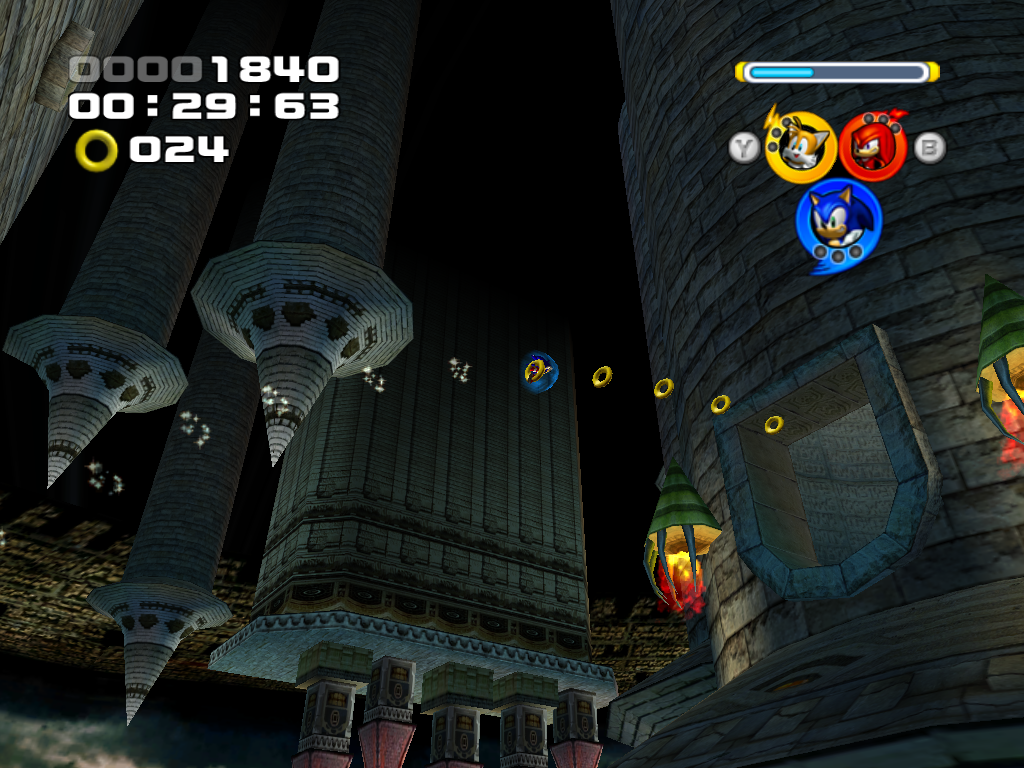 Music is where Heroes shines a lot too, with so many fantastic tracks that still are used in future Sonic titles. Seaside Hill has a great theme, Grand Metropolis has such a catchy melody and the different mixes of Hang Castle are really haunting. But some of my favorite tracks include Team Chaotix’s theme and the final boss theme ‘What I’m Made Off’.

From my description, Heroes sounds like a fantastic game right? I personally see it as one of the best 3D Sonic’s next to Generations, the Speed portions of the Adventure games and Sonic Unleashed but I have a few issues. It boils down to a few unique issues that can impact your enjoyment at varying levels.

I will explain each one. Camera Control is really odd, as despite all the games platforms having a second stick, Heroes doesn’t have the camera system of games like Sonic Team’s own Billy Hatcher or Nintendo’s Mario Sunshine. Instead, you use the shoulder buttons to move left and right or stop in place to use the right stick to to into first person. I grew used to this upon repeated playthroughs, but I can clearly see how one might not like this. 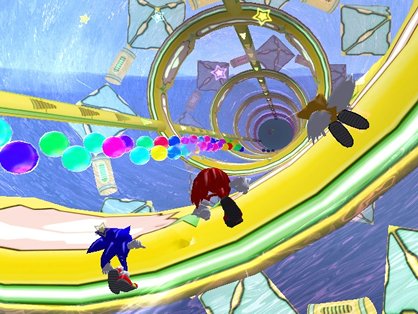 Special Stages are tricky, as you are pushed to keep on boosting by collecting orbs to build up a meter….but when you are boosting, the controls aren’t tight at all. Making these one of the worst controlling parts of the game. Playing the game four times to get everything can be an issue for people looking to 100% the game, but one I can see being the least of a problem. Beat the game as Team Sonic and Team Chaotix, and putting the controller down is more then enough for ones Sonic Heroes experience.

Lastly, is Team Chaotix, which has more mission focused gameplay. We will touch on this again when we head to Part VI of this series of Sonic articles but for now, Heroes does it well enough. Some missions are annoying but you have plenty of ways to backtrack to things you might miss and they are varied enough to continue being interesting.

Overall, I enjoyed Sonic Heroes a lot and its one of my favorite Sonic ventures I experienced both past and present. It does a lot right and it more or less being a Genesis-flavored Adventure game is fantastic to me personally. Seeing the iconic Green Hills and some Sonic 2 & 3 tropes used in really creative ways here was great.

Before the time of the Dreamcast’s end, SEGA still made systems and we got a lot of portable Sonic titles. New versions of Sonic 1 & 2 with different zones and level designs, the Sonic & Tails series which were closer to the Genesis games control/ability wise and hold up today, Spin-offs like Sonic Drift and to cap things off….one of the worse Sonic games of the Classic era with Sonic Blast.

But when the Dreamcast landed, we never got another SEGA handheld, so what about portable adventures for the Blue Blur? Say hello to SNK, makers of the Neo Geo Pocket Color. Other studios and publishers brought games to the platform and SEGA wanted to work with them, considering SNK helped design some parts of the Dreamcast itself.

SNK got some of its own internal staff on board and a new Sonic game was made; Sonic Pocket Adventure. This game could be called a remix in many cases, as it takes a little bit of every Classic Era Sonic title (Sonic 1, 2, 3&K) and blends them into one package. So, zones are ‘inspired’ by Sonic 2 locations, music is largely pulled from Sonic 3&K, and the special stages are right out of Sonic 2. What is original about this title?

The level design and the physics. Classic Sonic games on the Game Gear felt fine to me, but clearly didn’t match the ‘feel’ from the Genesis games in some cases. Here, they are very close to Genesis Sonic and it feels great rolling through zones at speeds very close to the Genesis. Level design is also quite tricky, with the game being challenging and quite hard toward the end. More so if you go out to get all the Chaos Emeralds.

Pocket Adventure got very high review scores and still stands tall as one of the highest rated Sonic titles with places like IGN giving the game a 10 out of 10. This team of internal SNK developers formed the studio known today as Dimps after the release of Sonic Pocket Adventure and what was another SEGA project they worked on?

An Advanced Sonic Adventure – Sonic Advance for the GBA

Sonic Advance is famous for two reasons; one being it was the very first official Sonic the Hedgehog title released on Nintendo hardware and two for it more or less being the ‘true’ Sonic 4 in everything but name. It ‘feels’ like Classic Sonic, it controls like Classic Sonic and design mentalities are lifted from Classic Sonic (different tiers of paths to explore, character controlling the same but unique features, original special stages, unique level themes, ect).

The game has some impressive sprite work and its one of the first times we see SEGA’s Dreamcast Style Sonic properly represented in a Sonic game (though Adventure 2 more or less hit this in 3D). All the characters and sprites match the official Sonic art work to a tee and they animate beautifully. Level design in the game is also quite solid, with it blending speed and platforming the best compared to later Advance titles.

One last thing to mention about Sonic Advance is Amy Rose, as she gets her first 2D playable debut with this game. She is the slowest out of the main three (Sonic, Tails, Knuckles) but her hammer has some interesting abilities. For example, if she slams it on a spring before launching, she goes higher then just jumping on it. In addition, she can spin her hammer around her when jumping so she can have the insta-shield like ability Sonic has but she cannot curl into a ball like everyone else. She can be dubbed ‘the hard mode’ of Advance but she bring some fun gameplay systems that are not present for the other characters. NeoGaf members in the Sonic Community thread brought to my attention various Classic Amy mods that take her systems in Advance and Sonic Adventure but having them work in side the Classic games and I highly recommend giving them a look.

Overall, Sonic Advance goes down as one of the best platformers on the GBA and Sonic will continue his roll through the GBA’s life cycle with some really fun platformers, a great brawler and one heck of a pinball party.

I hope you all enjoyed this article, but we are far from over. Got the rest of the GBA games to cover after all! Next time, we pay a visit to Sonic Advance 2 & 3, Pinball Party, and Sonic Battle before we hit what many dub the ‘Dark Age of Sonic’. Have a great day and lets keep on rolling!