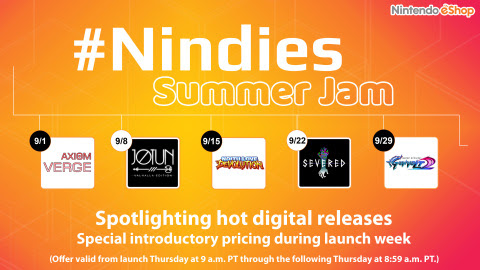 Nintendo has a lot coming to the E-Shop platform and they include a lot of quality titles. They plan on releasing a new indie title across the 3DS & Wii U every Thursday starting in September. This includes the games in the image above but also a lot of other games. You can learn more through a press release Nintendo gave on this subject below.

As Nintendo prepares to show off a number of cool indie games at PAX West in Seattle, the video game maker is making sure that game lovers all across the country can get in on the action from afar: The esteemed “Nindie” community has come together to put the spotlight on independent games in Nintendo eShop on the Wii U and Nintendo 3DS family of systems. Every Thursday in September, a new digital release will hit Nintendo eShop for Wii U, Nintendo 3DS or both at an introductory pricing promotion of 10 percent off during the first week of launch. Additionally, the featured developers will share video stories about their projects’ development in Nintendo eShop. The featured developers will also curate a shelf in Nintendo eShop highlighting some of their favorite games.

Every Thursday in September, a new digital release will hit Nintendo eShop for Wii U, Nintendo 3DS or both at an introductory pricing promotion of 10 percent off during the first week of launch. (Graphic: Business Wire)

“Our Nindie partners have been hard at work creating amazing content for Nintendo fans,” said Damon Baker of Nintendo of America’s Publisher and Developer Relations. “The #Nindies Summer Jam promotion not only makes it easy for fans to check out all the latest and greatest indie games on Nintendo eShop, but to also learn more about the developers that have worked so hard to create them.”

The release schedule is as follows:

Sept. 1
Axiom Verge from Thomas Happ Games – In this retro-style action-platform-exploration game, use the Wii U GamePad as your map, a way to easily swap between weapons or for Off-TV Play. A failed scientist dies in an accident, only to awaken in a mysterious, alien world. Where is he? How did he get here? And why do the fundamental laws of reality appear broken? Life. Afterlife. Real. Virtual. Dream. Nightmare. It’s a thin line. It’s Axiom Verge. Available on Wii U.

Sept. 8
Jotun: Valhalla Edition from Thunder Lotus Games – Jotun is a hand-drawn action-exploration game set in Norse mythology. In Jotun, you play Thora, a Norse warrior who died an inglorious death and must prove herself to the Gods to enter Valhalla. Jotun: Valhalla Edition features Valhalla Mode, a boss rush mode with even fiercer versions of the already challenging jotun. Exclusive to the Wii U version, the map is always displayed on the GamePad and God Powers can be activated using the touch screen. The game launches on Wii U first, and its GamePad features make this the definitive version. Impress the Gods!

Sept. 15
Noitu Love: Devolution from MP2 Games – The year is 2288. The city is protected by an organization called “The Peacekeepers League” and everything is swell except that it’s under attack by a robot army lead by professor Darnacus Damnation! Or is it… ? Available on both Wii U and Nintendo 3DS with intuitive, touch-screen controlled gameplay.

Sept. 22
Severed from Drinkbox Studios – Take control of a one-armed warrior named Sasha, who wields a living sword on her journey through a nightmare world in search of her family. Available on Wii U. Features include: Cross-Buy between Wii U and Nintendo 3DS, Wii U Off-TV Play, in-game Achievements, HD graphical optimizations.

Sept. 30
Azure Striker GUNVOLT 2 from INTI CREATES – Azure Striker GUNVOLT 2 is a 2D action-platforming game in the style of the Japanese classics of yesteryear. The great controls, crisp graphics, unique play mechanics and epic boss battles from the first installment are all here, along with a host of new features. Available exclusively on Nintendo 3DS.

Check out all of these games, as well as a variety of Nindie games for the rest of the year and beyond in the list below or in the #Nindies Summer Jam Sizzle Video at www.youtube.com/watch?v=V-IM7S4ByvM.