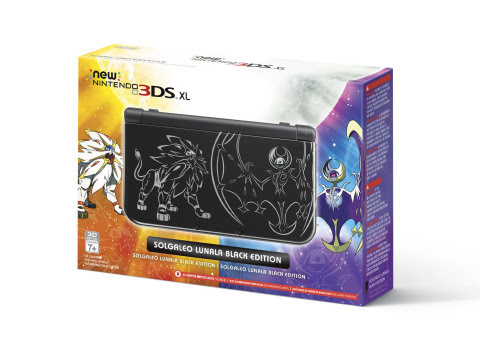 for the launches of both the Pokémon Sun and Pokémon Moon games on Nov. 18, fans will be able to purchase a New Nintendo 3DS XL system inspired by the games starting on Oct. 28 at the suggested retail price of $199.99. That’s three weeks before the games come out – plenty of time to break the system in before diving into the new Pokémon adventures (sold separately). The limited-edition system sports a slick black color with both of the new Legendary Pokémon, Solgaleo and Lunala, gracing the cover.

When the games launch on Nov. 18, fans can also purchase the Pokémon Sun and Pokémon Moon Dual Pack, which includes both games, as well as two codes that will unlock 100 Poké Balls each. The Dual Pack will be available at select retailers at a suggested retail price of $79.99.