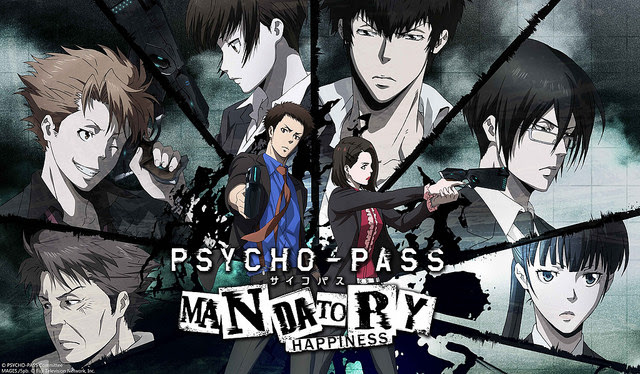 Visual Novels are a genre of gaming that focuses on the story-telling aspect of the video game medium. In many ways, they are interactive novels, letting you pick & decide what happens next for your characters and interact with the game world differently compared to other genre’s of gaming.

Psycho-Pass is a franchise that is very unique to anime, with its concept of law & order being blended with futuristic technology. The anime is one that many people enjoyed and it makes sense that people would make a game based on the promising setting the anime provides. NIS America released earlier this year in Japan Psycho-Pass: Mandatory Happiness for the PS Vita and recently released this title fully localized in western markets (NA & EU) on PS Via & PS4.

Does this visual novel explore the anime’s themes & setting in a creative light with its original story? Or does it falter in some areas?

This part of the game is vital, considering how the game relies on its story to carry the entire game. Thankfully the story is very interesting with a number of elements making it enjoyable to follow. You play as either a male Enforcer who lost his girlfriend years ago or a female Inspector who lost all her memories. They start working at Division 1 of the MWPSB, the main police offers of this futuristic world. After meeting the characters from the Psycho-Pass Season 1, they start tackling cases related to some being trying to make everyone ‘happy’.

What makes the story interesting is that it plays out like a normal police story, with you and the team doing preparation work by looking into the case than acting on the case and solving the problem. But how you solve cases is what makes things interesting but will touch on this in the gameplay portion of the review.

I personally enjoyed the character AI that you meet early in the game, as he has a clear reason for his actions but enough ‘mystery’ that makes you want to further dive into his character. His intentions are clear and come from a good place, but actions show how off he is regarding what makes people ‘happy’.

You have choices to make for both male & female characters, giving the story a layer of complexity. This applies to the female main character a lot, as due to losing her memories, you can either not worry about them and continue solving the case or try hard to keep your Hue Clear (emotional state) while also looking into your past. Depending on your choices, the game can end quite differently.

Interactions with the characters from the anime are also quite well done, with every character sounding & acting like they did in the anime. This is helped by strong translation work & well-done performances from the Japanese voice cast from the anime, providing an authentic experience for people that enjoyed the anime. I did notice some typos with character names but otherwise, the translation work here is solid and well done.

The game has many endings for both your male & female characters, giving you different paths to take in the story. Overall, the story here is well done with great plot twists, strong characters & the original cast made for the game fitting in nicely alongside established characters from the anime.

The gameplay of Psycho-Pass is that of visual novel; you have a story told to you but choices appear at key points of the game that you have to make. One nice touch is that you have a great save system in place (where you can press the Square button to open a menu & then access the save/load options). This allows the many choice portions the game presents to you having saving functionality, letting you try out all the choices so you can see what happens without playing large stretches of the game over again.

But the main feature of the game is The Dominator. This gun is famous in the series for deciding whenever a person is a criminal or just needs therapy. But the state that your criminals and victims are in, is all based on your choices.

During an investigation, you have a lot of options presented to you and how you handle a case determines the outcome. I stated in my first impressions of the game that after playing through the first case twice, I got very different results but this applies to the rest of the game as well. The second case for me got a bad ending so I made sure I did the third one correctly, to the point where no-one was killed/harmed. Overall the gameplay here is simple but effective; gives you enough choices to make but all the while having similar story beats for both the different main characters and the many paths you can go down in the game.

Regarding on the structure of the game, it has three chapters for each playthrough that last from 4-6 hours. Each one presents a large number of choices to pick from and depending on your actions, the ending can greatly change.

This game has a lot of content to play through, as despite the initial story taking 4-6 hours to complete, you can play the game again many times to get all the endings. Like I said in earlier portions of this review, your choices have a bit impact on the ending you get and how cases play out. It gives the game a lot of replay value, as being pushed to try out every possible choice can make the game last up to 30+ hours if you go after every ending/path for your characters.

Psycho-Pass is known for having a great futuristic look and this game is no exception. The slick menu designs, nice touches that pay homage to the anime series and the strong voice cast from the JP Dub returning; the game is a nice looking & sounding visual novel.

The new voices for the three new characters sounds great too, considering they match the tones and setting of Psycho-Pass very well. Psycho-Pass also has a glossary of terms/names that you unlock as you play through the, allowing you to read up on parts of the franchise’s world. This is very helpful for people that never watched the anime.

Before moving on to my score, I want to encourage that you give at least the first two episodes of the anime a watch. This will allow you to get an idea of the world of Psycho-Pass before jumping right into the world through this game. That being said, the game does a great job explaining the world to newcomers to the series.

Psycho-Pass: Mandatory Happiness is a strong visual novel that does a large number of things right. Its story is engaging and really opens up depending on the choices you make. You have a large number of paths to take, ensuring that you spend a lot of time with this title to see every ending. Visually it looks like the Psycho-Pass anime & if you loved the show, you will really enjoy this game. I greatly enjoyed my time with this game and recommend it if you enjoy visual novels or watch the Psycho-Pass anime.

I reviewed this game on the PS Vita platform with a review copy provided by NIS America. The game is currently out now on PS Vita & PlayStation 4 with NIS America promising a PC release sometime in 2017. Currently as of this writing, the first two episodes of the anime are free on NA PSN, so you can watch those if you wish.