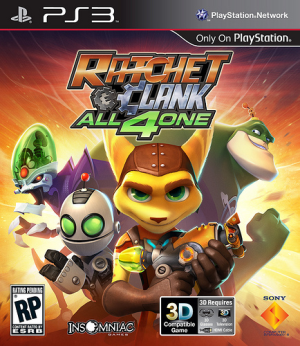 The Ratchet & Clank series is famous for offering constantly quality gameplay that appeals to all ages. When the Future series ended for a short while through A Crack in Time, Insomniac Games started work on a new Ratchet game a few years later.

Instead of another mainline platforming adventure, Insomniac Games produces a four player co-op adventure with a larger focus on platforming instead of shooting. Ratchet & Clank: All 4 One is one of the  very few 4-player co-op 3d platformers on the market to this day too.

Considering the legacy of the series that must mean this has a lot to live up to. Does the game still offer the great line up of weapons past games alongside the tight gameplay and story of prior titles?

This game got a prequel comic which is called, of course, Ratchet & Clank. It continues the story from a Crack in Time; Ratchet faces an old foe again, characters from past games return, more drama is shown and the series trademark humor is present in full force. The comics are strong products but is important to reference as they take place before All 4 One.

The game opens up after the conclusion of the comics, with Quark becoming president and Ratchet & Clank relaxing from a long time of adventure, with Ratchet saying they are retiring.

They still come with Quark for a special award though, as they figure it’s a trap. They are right, with Nefarious & Laurence come back after events from A Crack in Time with a powerful being. The creature turns on them, so all four work together to take it out.

After stopping the creature, a giant ship takes the creature and the four into space, being within the ‘Creature Collector’ now. Ratchet, Clank, Quark and Nefarious now have to work together to escape. Simple and not much happens but it can be quite funny leading to an enjoyable story.

Comparing this to prior Ratchet & Clank games, it is disappointing as a narrative. But thanks to the sharp writing and fun dynamics between the four characters, you have an enjoyable narrative.

This is where things really get interesting, as the entire gameplay and design is quite different from past games in the series. Instead of the traditional 3rd Person view point that the series had up to this point, we instead have a sudo-top down perspective where you can play with up to four players. Characters control like how you would expect them with every character having the ability to throw an object (Ratchet = Wrench, Clank = Sprocket, etc.), double jump, have a few different melee attacks and everyone having access to the games line up of weapons.

You can still strafe by holding down one of the triggers, but you it now locks on to a single foe. This was implemented to make combat manageable with four players and to use the synergy shot. This feature is where if everyone is locked on to the same guy and attacks with the same gun, the impact is much more powerful and the effects are more profound.

Other elements to the core gameplay like grinding on rails, traditional 3D platforming and using gadgets are present but they all work differently. Grinding has larger rails to give more room for the players, platforming is pushed far more then any other game in the series and the gadgets all focus on co-op support. One example is the slingshot, with it attaching to other players instead of just the target or the Vac-Gun which can suck up your team mates to shoot them across larger gaps.

Level design is also constructed differently, with level gimmicks being more common. Leaning on the edge of a car to move faster, using a jet pack, manning a turret, riding on a jet-ski; the game loves having gimmicks like these across it’s many stages. The planets are now split up into different sections instead of being long levels like in prior titles.

This all sounds like Insomniac did a solid job making a Co-Op Ratchet game and I would agree. The change-ups from standard mechanics in the series are smart choices to work with four players and the level designs themselves are quite strong. My biggest issue is that the game is just boring at points; it is best to play this in short bursts instead of running through it in a single play session.

The gameplay in Ratchet games are very strong, with tight controls and great weapons making things feel fresh the whole time through. However, the game just doesn’t have those elements down pat. One thing to note is that this game is 30FPS, which shouldn’t be a major deal to point out, unless you take into consideration that this is the first 30FPS Ratchet game ever made. This lead to the core gameplay not only adjusting to the perspective shift, but response time of the frames as well. Thankfully, it’s fine and perfectly playable but it effects the combat system greatly.

Without having the fun combat aiming systems from past titles, it makes every gun here feel the same. The Grenade Launcher? The Pig Gun? All the same due to the combat system here not making the weapons feel special enough. You felt the impact your guns had in past games and with how you had to use the tight input systems to navigate 3D worlds, it made combat fun.

You can feel the core gameplay systems were built with Co-Op in mind, but this makes the guns not feel special and that honestly bothered me. Thankfully the platforming is the strongest part of the game. The worlds are still large and have a lot of goodies to find like Gold Bolts, level design has some fun platforming challenges and the gimmicks each stage has making every level feel fresh.

While the game suffers from being boring for long play sessions, this can be helped with the multiplayer. When playing solo, the game adjusts well for single player; Clank hops off Ratchet’s back whenever co-op stuff is needed and is a great AI partner for major boss encounters and other such conflicts within the game.

This game is quite a long game, with the base campaign lasting over 10-12 hours. Playing it solo will take a longer time to beat compared to playing through with a buddy or two but going back to levels to get every gold bolt and fully upgrading your guns will offer replay value.

Visually, the game looks quite nice with the bright colors and great art style the series has coming through at every point. When you reach the more nature rich locations or the ice world at the middle of the game, the game looks great.

But you can tell the visuals took a hit after A Crack in Time to accommodate the co-op gameplay. It still looks good. Musically, the game sounds great and to me feels like a return to the ‘sound’ of the PS2 games at points. Blending the sound from the PS2 games and the PS3 games, it results in a nice soundtrack that fits within the series quite well.  The game also has the weapon-get cut scenes like A Crack in Time and are great like they were there.

Ratchet & Clank All 4 One is a solid co-op 3D Platformer that I enjoyed but not nearly as much compared to past tiles. Insomniac did a great job making the mechanics from the series past work in Co-Op, adjusted the difficulty to work well for solo-play and it has the Ratchet spirit. But the lack of great gun play and the different controls detracted from my enjoyment of the game. If you have a few friends and want to kill a few hours, give this a shot. For the first spin-off in the series on a console, this is a fun experimental co-op platformer that quite enjoyable despite some issues.