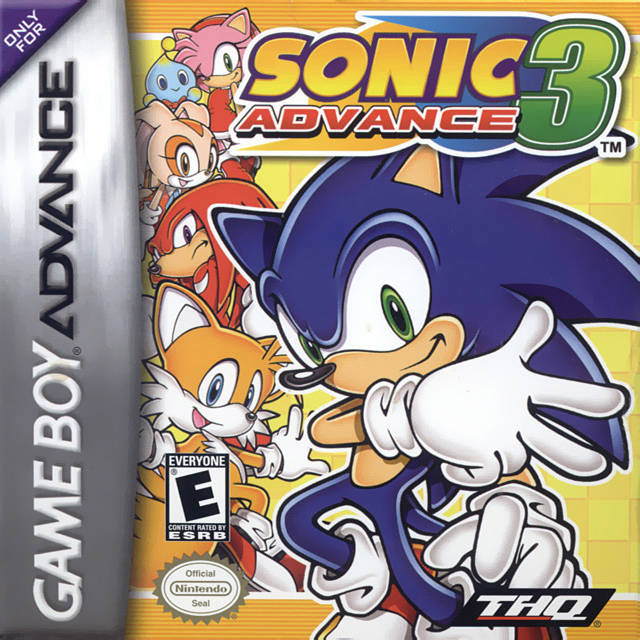 This is the final platforming title for the Sonic series on the Game Boy Advance and it is in many ways, the Sonic 3&K for the Advance series. The highest stakes for the story, large cast of playable characters and it also re-introduces the Tag Mechanic that Knuckles Chaotix featured.
With the Nintendo DS on the horizon around the time this was released, many were looking toward the DS for Sonic’s future. But does Advance 3 close out the Blue Blur’s Game Boy Advance adventures well?

The game opens up with Eggman shattering the world into pieces and Sonic & Tails looking into fixing the planet. As they run through various zones, we encounter old friends from other Advanced ventures and they join Sonic’s cause.
One interesting thing is that elements from past Sonic adventures on the Game Boy Advance appear again. For example, Emerl from Sonic Battle shows up again and turned into the games major villain. Very interesting way to connect past and present in one package I find.

You always fight him one-on-on and he morphs into different machines Eggman makes; he is a consistent threat and its great to see that. Making our former friend the main foe was a great move on Sonic Team’s and Dimps part. It helps give another goal in stopping the evil doctor in addition to saving the world. With the world shattered and level themes getting harsher the further you get into the game, visual story telling from the Genesis games is present as well, making things feel grand in scope.

While the story overall isn’t the series best, it’s nice to see the stakes pushed far. This results in a grand conclusion to a series of portable adventures.

The core design of the game is different then past Advance games, resulting in a larger overall experience compared to Advance 2.

Hub Worlds appear for the first time in a 2D Sonic adventure and every zone in the game has one. You explore for optional mini games to get more lives, access stage rings (to go into different acts) and jump into a giant ring to access an interactive menu.
These locations allow us see how many Chao we have collected, swap our playable characters and go into different zones. I honestly don’t like this system due to it feeling like unneeded busy work. Sonic works best when you can jump right into the action and while these hub areas are fine enough, they could of been far more engaging with mini-levels to explore, more mini games to complete and more. But for what they are, the hub worlds work well enough. Just would like for them to be more interesting to explore.
The Special Stages are back…..and they are once again a major issue.

With Advance 3, it’s far better on paper and more fair. You have three/four Chao you collect in each act and after you collect all the Chao, a special key spawns in a random spot in any of the three acts. You collect this and find a locked spring in the hub world.

After you unlock it, you play a special stage where you are on the Tornado and like Sonic 2, you have to collect X amount of rings for each lap. You can hit boost sections to morph the Tornado into its X Form from Sonic Adventure, allowing you to move around easier.
I appreciate that you can see how many Chao you collected in the hub world and you can see the Chao you saved in a little Chao Garden. It’s a big improvement over Advance 2 but I still don’t like this system though, as you have to go out of your way just to access the special stage when it was so simple in past games. Like the hub worlds though, I can deal with this and the special stages are fun. It’s just that things that were simple in past titles got over complected for no good reason.

The last element is Tag Actions and this ties into the gameplay. You can use your selected partner with the R button and after you held on to it long enough, you can use a special action. Either jumping really high, boosting and more! It changes depending on who you pick as the partner but still, nice system in place.
Design got it’s own section for this review because there is a lot more to Sonic Advance 3 compared to Advance’s and Advance 2’s basic level-to-level progression. I don’t mind it but I personally enjoyed the progression past 2D Sonic games offered compared to this. Again, it’s not a major problem but one that I feel could be refined a bit more to offer a better experience.

The core gameplay is Advance 2, but with a stronger focus on platforming. In many ways, its trying to be the Sonic 3&K of the series; you have upper and lower paths to take in some zones and you can use the team abilities to explore new locations in zones.
Sonic and friends control well and the Team abilities work great. Unlike in past games that attempted this like Knuckles Chaotix, you don’t have a band tethering you with your partner, they just follow not unlike Tails in Sonic 2 and Sonic 3.

This makes things very controllable, as you don’t have to worry about your partner getting in the way of going fast or platforming. The Tag Actions come into play, with different teams having unique abilities.
Sonic & Tails/Amy & Cream have the R trick action from Advance 2, Sonic & Knuckles/Knuckles & Sonic offers strong melee attacks and can break steel objects, Cream & Anyone gives access to the Chao Missile Attack.

This makes replaying zones once you unlock everyone very rewarding and taps into it’s inner Sonic 3&K; replaying past locations as different teams offers new paths to take and it can be a lot of fun.
The level design is all over the place sadly. You have zones like Sunset Hill which is mostly great and Twinkle Snow that have solid level design but some parts of Route 99 can be really punishing with crushers and spikes everywhere. Mind you Route 99 is the first zone in the game, so that is a bit of a problem.
I get the impression that Dimps wanted have half-and-half with Sonic Advance 3; they wanted the platforming from Advance 1 but the speed from Advance 2. But they fail to accomplish a middle ground. This leads to some zones having annoying level design while others are honestly enjoyable.
Boss fights are different compared to Advance 2, where you are they are stationary instead of moving around. These are fun and feel great to tackle. With Cream’s Chao Missile attack being less broken, it makes fights more challenging even if you play as her.
Sonic Advance 3’s gameplay and level design is something I both enjoy and have issues with. On one hand, the core gameplay never felt better and the team mechanics offer depth that feels natural for the Classic-esc gameplay offered here. But the level design just doesn’t always come together well and that is a major issue sometimes. You will still have a great time with the gameplay but some zones will get you annoyed.

The presentation is hands down one of the GBA’s best, as it has the same great sprite work from Advance 2 but with locations filled with detail. Scrolling backgrounds with lots of depth, effects when fighting bosses, and some really great artistic design in places shows how far Dimps was able to play with the GBA graphical hardware.

The music is hands down one of my favorite Sonic soundtracks out there! It wasn’t made by Dimps sound team but instead the core Sonic Team sound team. If you loved the console Sonic soundtracks, you will really enjoy the music here. Sadly, it feels limited by the GBA hardware, as more modern instruments like Gutars sound muffled. That doesn’t prevent the soundtrack from being fantastic though.
I have to mention Sunset Hill on its own, its one of my favorite versions of Green Hill Zone. The added instrumentation and ‘epic’ sound makes it so memorable.
https://www.youtube.com/watch?v=JtpHcdiVkm0
Such a great selection of tracks and its great to see the Super Sonic Boss carry over the final boss theme from Sonic Battle. Closes the Sonic’s GBA adventures with a epic score that the series deserves.

Sonic Advance 3 feels like a game trying very hard to be grand, epic and conclude the Classic 2D Sonic series in many ways. Sonic will never feel like he does here in future games outside the upcoming Sonic Mania and Advance 3 does a lot with it’s gameplay I honestly love.

The Tag Mechanic is a wonderful inclusion that adds a lot of depth to the gameplay and boss fights are a lot of fun! But the level design issues and basic design elements hold the game back. Some simple changes and stronger level design prevent this from being one of the best 2D games in the series but the problems are major enough to ruin the experience a bit.

Despite all my issues with Advance 3, I appreciate it for being a strong game gameplay wise and continuing to offer the high caliber presentation I expect from the Sonic series. Dimps closes the Advance series out well despite a few issues holding this game back.