Nintendo finally showed off the Switch and it’s line up of games for 2017. They were spread quite far across a number of releases from both Nintendo and third party studios/publishers. I will be sharing my thoughts on both the conference and games announced for the Switch outside the conference. Lets switch things up and talk about Nintendo’s upcoming console!

Nintendo opened the presentation right away talking about launch date (March 3rd) and price point ($299.99), which was a good move; gets that out of the way for the other details. They included discussing the Joy Cons, which have a lot of features; NFC sensor, motion control, HD rumble and IR pointer. These will help offer experiences seen on the Wii and Wii U come back for games that decide to use the features.

One major point is that Region Locking is completely gone, so if you want to import from Europe or Japan, you can do that now! This is great news, as past Nintendo systems lacked this ability.

You can also slide the Joy Cons into a special grip and even have wrist straps for the Joy Cons as well. These all show Nintendo having a nice compromise between the Wii Remote and traditional game controller; you can use one or the other but both are the same thing. Like the Wii Remotes, the Joy Cons will be getting colors and games that use them excessively.

ARMS is a great example of motion controls being used, as it feels like Wii Sports Boxing with a Punch-Out fair. Another trailer that released showing off the motion controls was 1-2 Switch. While 1-2 Switch is making the systems launch, ARMS has no solid release date yet. This makes me think we will see it sometime in Summer alongside Splatoon 2 and other Nintendo games.

Super Mario is back and he is exploring new worlds in a return to the 3D platformer style he created with Super Mario 64. Sporting moves old and new (cap tossing), the plumber is exploring strange worlds outside the Mushroom Kingdom. The worlds shown off include a New York City-style location, Day of the Dead-style desert and odd Alien planet. They look beautiful and the animation work on display looks very natural.

Story seems interesting too, with Mario hopping across worlds to save Princess Peach from marrying Bowser. Mario’s hat get’s stomped on by Bowser and a cap with eyes offers a helping hand. While basic, it works and like how the story is going in a slightly different direction. Sadly this isn’t releasing for the system’s launch but will be the Switch’s holiday title this year.

Nintendo promised that they will have hands-on gameplay for this new Mario adventure in the future, so people can play it soon hopefully.

Mario and friends are drifting into action this April when Mario Kart 8 lands on the Switch in a deluxe form! The game will contain all the DLC and base content from the Wii U release but will be joined with new tracks, characters and an improved battle mode.

With the later being a major issue for the Wii U release, seeing this being added into the game through courses new and old is wonderful. Items like the Boo and Feather come back too, adding new dynamics to the racing action. The Inklings and Inkopolis are appearing in this release of Mario Kart 8 as both racers and a battle mode course. From the trailer, they will work similar to the Village (having many skins you can select). Other new racers include King Boo, Bowser Jr. and Dry Bones. These are fan requested characters, so it’s nice seeing them return.

While this isn’t hitting the Switch launch, it is coming out very close to the system’s launch releasing April 28th.

Now this is a shocker; Konami offering a new game?! Jokes aside, it’s great seeing Bomberman back and he will be headlining the Switch launch through the release of Super Bomberman R. Seems to support eight players and will have a story mode. Story looks charming and the art style looks quite nice.

Honestly happy seeing Bomberman back after all these years and hope many enjoy his newest adventure on Switch.

SEGA is a major supporter of Nintendo and Sonic was confirmed for the platform a while back thanks to Sonic Project 2017. However, Sonic Mania was never confirmed for the system when it was announced. I was thinking it might skip the Switch but apparently, it won’t. This got a new trailer after the presentation and joining it was the localization announcement of Puyo Puyo Tetris! Both are releasing on other systems, but it’s great seeing SEGA present at Nintendo’s launch and launch window.

Legend of Zelda Confirmed for Switch Launch with New Trailer

We covered Zelda many, many times on here before, but finally it got a solid release date; March 3rd. So this will launch with the Switch as it’s pillar game, not unlike Twilight Princess on the Wii. This latest trailer shows off the story elements to the game and it looks promising.

I honestly don’t have much to say, as we saw Breath of the Wild many times at this point. Just happy it will be releasing soon, as many want to play the game after years of waiting.

After the success of Hyule Warriors, Nintendo asked Koei Tecmo to produce a game in the series for the growing Fire Emblem franchise. We know nothing outside of this game being announced for development and targeting a Fall 2017 release. But it’s great to see the team that made Hyule Warriors tackle the enjoyable FE series.

This was both expected and a nice surprise. Rather than being an expanded port like Mario Kart 8, Nintendo outright is making a sequel to Splatoon for the Switch. Supporting the gyro aiming from the Wii U release and having new weapons to mess around with, Splatoon 2 looks to be a promising game for the Switch’s library.

Bits of a story mode were shown in the trailer but the bulk of the gameplay focused on the online and multiplayer modes. A new hub was shown off and hopefully we will learn about that soon. Splatoon was a surprise hit for the Wii U and hopefully it’s splash on the Switch is just as successful.

Nintendo is making another game in the Xenoblade Chronicles series for the Switch! Having a massive open world like the original and it’s sequel Xenoblade Chronicles X, we will be going on a grand adventure across large locations. No story details were given but you can get an idea about the plot from choice dialog quotes in the trailer.

It has no release date, making me thing it might be a later release for the Switch (not unlike Xenoblade Chronicles X). As we get closer to E3 2017, Nintendo will hopefully share more about the project.

The Nintendo Switch will be getting support from Bandai-Namco (Dragon Ball Xenoverse 2), Square Enix (DQ X, Dragon Quest XI, DQ Heroes I & II, etc), EA (FIFA 18), Bethesdia (Skyrim Remastered) and other studios. Many indie studio have ports in the works like Platonic Games Yooka-Laylee and Yacht Club Games Shovel Knight. We will report on more announcements from third party titles for the Switch as information comes out.

Major Details about the System 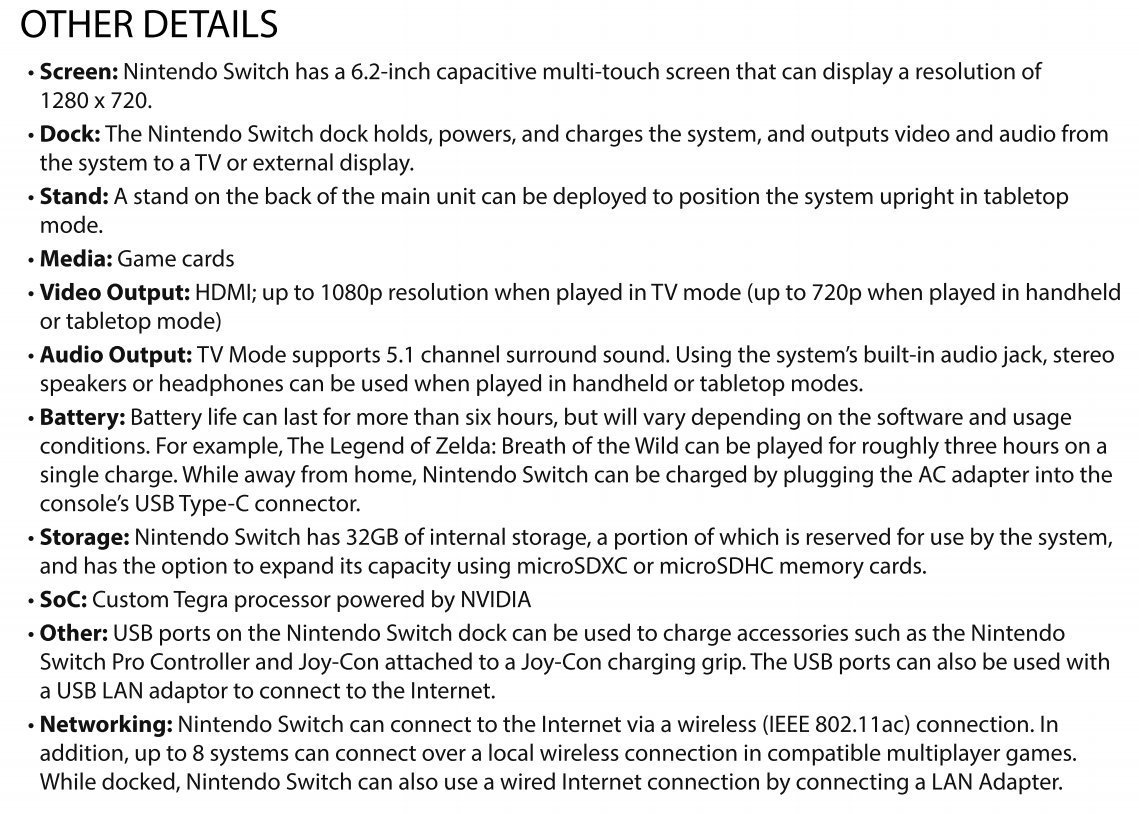