Nintendo are known for making software that sparks children’s imaginations and creativity, and Super Mario Maker is just one example of this. Through giving a large collection of tools to play around with, gamers of all ages can create creative worlds to jump around within. Nintendo is holding a special event that sparks children’s imaginations using the 3DS version of Super Mario Maker.

With the Super Mario Maker for Nintendo 3DS game, which recently launched exclusively for the Nintendo 3DS family of systems, players of all ages can play a wide assortment of fun Super Mario courses, as well as create their own wild courses using the game’s intuitive interface. To highlight the engaging creation aspect of the portable game, Nintendo teamed up with the City Dads Group – an organization focused on giving dads a network to bond with their children and fellow parents – to bring an interactive “Build, Play, Share” workshop to the Los Angeles Public Library. Hosted by Nintendo game experts on Jan. 27, the workshop provided a fun space for families and local teens to enjoy building together. But in this case, instead of building something physical in the real world, participants learned to build virtual courses in the world of Super Mario Maker for Nintendo 3DS.

“With the recent national push for more STEM programs for children in schools, partnering with City Dads Group and the Los Angeles Public Library was a great opportunity to highlight the level-design capabilities of Super Mario Maker for Nintendo 3DS,” said Doug Bowser, Nintendo of America’s Senior Vice President of Sales and Marketing. “This exciting event helped introduce a new playtime activity for the digital era that families can enjoy together.”

“City Dads Group was fortunate to collaborate with an amazing brand like Nintendo to host a game design workshop in the L.A. Public Library,” said Lance Somerfeld, co-founder, City Dads Group. “The interactive event immersed dads and their little ones in winning experiences that are fun for the whole family.” 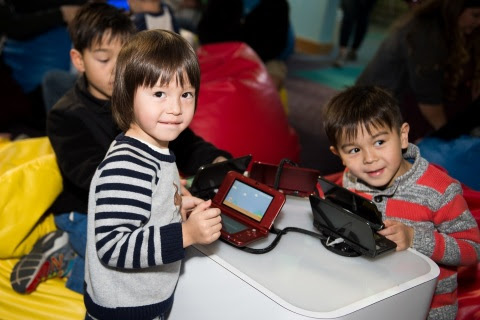 The “Build, Play, Share” workshop invited people of all ages to the Los Angeles Public Library’s Central Library in downtown L.A. to work in teams to conceptualize and build their own courses in Super Mario Maker for Nintendo 3DS. Game-design experts from Nintendo were on hand to lend their expertise to attendees, while also providing tips and sparking course-building ideas. In addition to this event in Los Angeles, video assets will soon be available on the Play Nintendo website for other organizations to access so they can host their own “Build, Play, Share” workshops.

Super Mario Maker for Nintendo 3DS features 100 built-in courses, as well as select courses from the Super Mario Maker game on the Wii U console. In addition, courses that are in progress can be shared with other players via the Nintendo 3DS system’s StreetPass feature and local wireless so multiple people can collaborate on building courses together. Nintendo 3DS systems provide a fun way for adults and kids to enjoy video games anywhere, whether on a road trip, at home in the living room or even in the library! With many different models available, anyone can pick up a Nintendo 3DS or Nintendo 2DS system starting at a suggested retail price of only $79.99.

This is wonderful to see Nintendo use their video games to help students learn; shows how they care not only about game development but the future in the industry. We will continue reporting on Nintendo as further information comes out.