Sonic is no stranger to the realm of racing games, as the blue blur drifted under sunshine filled tracks and SEGA worlds alike. But Sonic also took up some hoverboard action in 2006 in one of the franchises better releases of that year through Sonic Riders. Bending the trick-pulling action from games like Tony Hawk Pro Skater with Mario Kart styled race tracks, the end result was an enjoyable game with a high difficulty curve that sadly lead to divisive reception when originally released.

Fast forward two years and SEGA shoots for the stars with Sonic’s next racing adventure in Sonic Riders: Zero Gravity. Taking feedback many gave to heart, Sonic Team and CRI Middleware added new gravity mechanics alongside various refinements to the formula. Does it create a stronger racing experience? Lets go through gravity and race our way for an answer!

Taking place after the original Sonic Riders, we follow the two teams from Team Sonic and the Babylon Rogues. Both have unique goals to complete across the story and how things connect are quite interesting. Sonic and friends are riding in a hovercar while Tails explains how a metal ring crashed into his workshop. After some robots give chase after seeing the ring, gravity freezes in place and Sonic races the robots on his hoverboard using the gravity powers of the ring. As the story continues, the Heroes learn more about the lore behind the rings while butting heads with rivals ‘The Babylon Rogues’.

The Babylons want to use the gravity rings to be the best races on the planet, with Jet the Hawk specifically wanting to beat Sonic using the rings power. It’s a decent set up and the character converstations heavily remind me of Sonic Adventure 2. What I mean, is that character feel natural with one another and it keeps a solid tone across the entire adventure.

I really enjoyed the story and character interactions are some of the franchises best. This is helped with surprisingly sold presentation with squash-and-stretch animation and some of the series better voice acting. Overall one of the better Sonic stories in the series.

The game is broken up into various modes like most racing games. You have two lengthy story modes with unique tracks to both of them to race through. Completing each story unlocks more racers to play as in other modes in addition to earning rings to purchase Gears you can use for races. Gear are the hoverboards characters ride on and unlocking them all requires a lot of rings. You can earn them across all game modes, making unlocking content pushing you to experience everything. 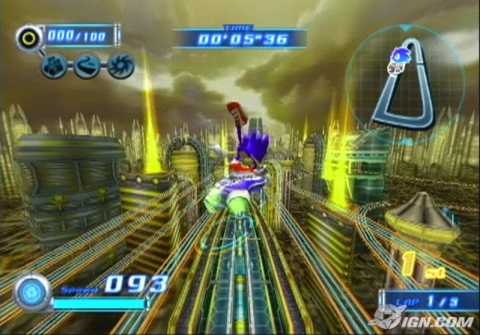 Other modes include an in-depth mission mode which forces you to master race tracks in collecting rings, using specific characters in solving challenges and more. I enjoyed the mission mode here and it never felt unfair; the difficulty is perfectly balanced which is a stark contrast to the mission mode in the original riders. Also worth noting about the mission mode is special unlockable characters that only become playable after completing most of them; they are a love letter to fans of SEGA classics.

You also have Grand Prix and Time Trial modes like in other kart racers but also present is a battle mode. This works similar to the Mario Kart series and with gameplay improvements in place over the original Riders, it’s a lot of fun.

Sadly one feature I’m disappointed isn’t present in the Wii version of Zero Gravity is a online racing mode. The Wii was no stranger to online support and the exclusion of this feature limited multiplayer functionality for solo-players. With the large wealth of content to play for the single player gamer, that isn’t much of a problem but it is something I wished was present in Zero Gravity.

Despite lacking a major feature most modern racing games had during the time period, overall design is an improvement over the original Sonic Riders due to a more refined Mission Mode and a great shop system that gives every mode purpose through ring collection.

Zero Gravity is quite interesting as a racing game, considering how different it ‘feels’ from the original Sonic Riders. The original game felt frantic and risky, largely due to the fuel-draining Air System that forced you to nail every trick you pulled. That compounded with odd mechanics like spinning the analog stick during set-pieces and a drift system that felt loose resulted in a game that was difficult to play but rewarding to master.

What Zero Gravity does is that it takes base mechanics from the original Riders and makes things easier control-wise. The end result is gameplay that is quite strong, if easy at points. Basic controls have you using the D-Pad (or motion controls) to steer your Gear left/right while the 1 Button controlling your drift/boost & the 2 button making you jump.

When you collect rings, you gear can level up. This unlocks special abilities for your character, like grinding on rails or getting a higher gravity meter. Not only are you pushed to collect rings for unlocking more Gears but to also make yourself stronger during the race. It gives importance to your rings, making collecting them a key element to winning races. Gravity plays a big role in races too through having the ability to use your Gravity Drift to use your Gear on walls or fly in the sky at high speeds. I greatly enjoyed this mechanic due to how rewarding it feels slamming into objects to keep your Gravity Boost going or finding a short cut through the Gravity Drift.

Level design is improved because of these systems, making them dynamic and fun to explore. The factor of pushing class systems (speed, power, flight) is still present but it’s locked to the gears you use rather then the characters. Between your gravity powers and the class system, it makes races unique to you as the player.

Sadly the game suffers from two key areas that I feel could be improved upon. The trick system is still present but heavily simplified; you just press jump at the right movement. It makes things simple but the complex trick system made races frantic in the original Riders and to see that completely gutted is disappointing. Another issue are the items, which feel really weak compared to other kart racers on the market. They have purpose but the most useful ones are Gravity/Rings bonuses.

While I have minor issues with the gameplay, the additions and fixes over the original Riders is noteworthy and greatly improves the overall gameplay experience.

Zero Gravity is odd with it’s presentation due to character models having a ‘shiny’ texture to them that can look odd. Animations and tracks look fantastic though and the game oozes with futuristic charm. Menus are a good example of the polished presentation, with striking colors and nice transitions. Sonic games tend offer quality visuals and Zero Gravity is no exception to this rule.

Music like most Sonic titles is quality material, blending futuristic sounding instruments with great melodies. The main theme of the game Ungravitify is one of my personal favorite Sonic themes in the series and another personal favorite track is Through Traffic. It has such a great energy the entire soundtrack that makes races feel so good to race through.

Regarding frame rate, the game is a locked 60FPS on the Nintendo Wii with a higher resolution over the PS2 release, with that version having minor drops but is otherwise very similar to the Wii release graphically. I feel it’s needed to discuss controller support, as the game has a few options depending on the version. PS2 release works with the DualShock 2 while the Wii version supports both the Wii Remote & GameCube Controller. I honestly recommend the GC Controller if you plan on playing the Wii version.

Zero Gravity is a solid racing game that does a lot of things right. While it may be a step back regarding gameplay complexity, it trades more advanced elements in favor for more refined mechanics and controls. The end result is a great playing and looking racer that is a blast to play alone or with some friends. Even if you aren’t a fan of the Blue Blur, I recommend this gravity-filled racer to any Wii or PS2 owner.